Foreign exchange is one of the most actively traded markets in the world. From its roots in the early 1970s, it has grown to become a five trillion-dollar a day market.

However, there is still an element of mystery about what exactly the drivers of FX prices actually are, and what traders need to look out for as they search the markets for opportunity. In this article, we’ll take a look at some of these factors while putting them into context for you.

This is where FX trading began. Ancient merchants needed a common medium of exchange or a basis to value one currency versus another. The simplest way was to compare the cost of a commodity considered valuable in different economies. Various commodities were used, but the one that stood the test of time was gold.

If you knew the cost of a fixed amount of gold in economy A as well as within economy B, then you’d have had a very plausible basis from which to decide what the exchange rate between the currencies of A and B should be. For example, if gold was twice as expensive in currency B versus currency A, then the rate of exchange between the two currencies should have, in theory, been two to one, all other things being equal.

Modern markets have become considerably more sophisticated since ancient times, but concepts such as Purchasing Power Parity (a measure of the ongoing spending power of a currency) are still fundamental when it comes to calculating relative FX valuations.

As markets evolved, so did the need to know more about the instruments people traded, and the drivers of the price behind them. At the same time, governments wanted to know as much as they could about the countries they managed and their economies, so they set about gathering as much data as they could.The advent of computers and the emergence of internet technology aided this information-gathering process even further. Market participants were able to gain access to this macro data through the network as it became widely distributed and available in near real time. A standardised economic calendar was formulated with regular release dates for data, and these dates were known in advance.

Market participants built their own models and crafted their own estimates for the data points, which evolved into a framework against which the market could compare the results of these data releases.

The creation of an expectation – or consensus forecast – for each data release also created the opportunity for the market to be surprised, either positively and negatively, by that data.

Over time, the degree of deviation would itself become a metric by which macroeconomic data could be judged in the form of ‘economic surprise’ indices, some examples of which are set out below. In summary, the bigger the deviation seen in a data point from the consensus forecast,  the more significant the impact that data point would have on related FX prices, other instruments and their respective surprise indices. 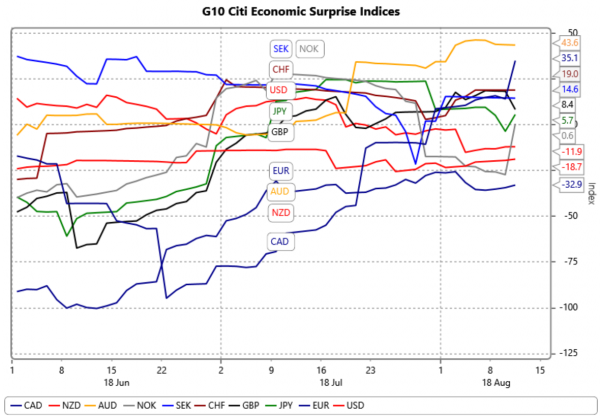 A distinct hierarchy of data also came into being as well, with central bank policy announcements and changes in interest rates sitting firmly at the summit, followed by high level, top-down macro data, a subject we cover in greater detail in our article How To Read The Economic Calendar.

As with all markets, FX is subject to the ebb and flow of supply and demand. Even in instruments that turnover hundreds of billions of dollars per day, we can see these forces at work. Consider the following scenarios:

As demand for an instrument rises, the price that market participants are prepared to pay to own that instrument rises in tandem. Sellers of that instrument, at current price levels, are taken out (traded with), or withdraw their orders, and the price rises to a new threshold, which is sufficiently attractive to tempt fresh sellers into the market.

Buyers now have the opportunity to trade with sellers at the higher price. If the buyer’s demand outweighs the seller’s supply at this new price level, then the instrument’s price will rise once more. However, if the sellers outweigh the buyers, then the price will fall until it finds a point at which buyers are tempted back into the market.

If buyers and sellers are equally matched or are in equilibrium, then the price of an instrument will be largely unchanged. In modern electronic markets, this trade-off between supply and demand happens near instantaneously, but we can still observe it through the use of charts which track price performance and price action over set periods of time.

The hourly chart below of USDZAR shows the rate jumping or gapping higher as buyers of the South African rand are cleared out, at which point the rate spikes sharply higher, before buyers reappear and dollar-rand retraces some of its prior losses. 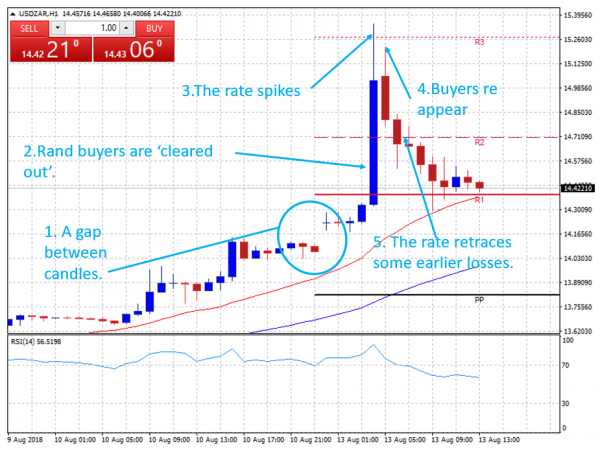 Significant amounts of money are managed globally by funds who specialise in momentum investing, and many individual medium to long-term traders are also effectively trading momentum. Money tends to flow into momentum trades when price action and macro data are aligned. As this combination suggests that the momentum can and should continue, until such time as sufficient new information comes to light to end it. Of course, in backing this momentum, traders are also adding to it at the same time. However, the more crowded a trade becomes, the more volatility we are likely to see when that move comes to an end, particularly if it does so abruptly, perhaps because of an economic data surprise or change in central bank policy.

Momentum can be – and often is – accelerated by human emotion. In other words, when the market pushes on a door and it opens, it keeps pushing. The emotions that drive these moves are fear and greed, which in some senses are actually two sorts of fear – the fear of loss and the fear of missing out.

The sharp fall in the value of the Turkish lira seen in the summer of 2018 is the perfect example of this trait. The lira had been moving lower all year, but that downside gained extra impetus in August as the central bank failed to raise interest rates as anticipated, and the US unexpectedly imposed trade sanctions on Turkey over the detention of American clergymen. The markets sensed blood and kept selling the Lira. As a result, the lira fell by -26.36% versus the US dollar in a single trading week, taking its YTD losses versus the greenback at that time to just under -70%.

There are many more factors that can influence FX prices but most of them can be aligned to one of the major headings we‘ve discussed above. The best way to get to grips with these factors is to experience them for yourself and to do that you need to be watching the markets over key announcements and interest rate decisions, or staying ahead by watching the news flow and social media. If you have a trading account, you can even take a position to see what happens but, of course, it would be better to do that on a Pepperstone Demo account until you feel comfortable with the way that FX prices move and how you react to these movements.