Where does money flow in times of financial stress and why?

Safe haven assets are financial instruments or commodities that investors turn to in times of stress. We’re not talking about personal stress, not in this article, anyway, but the type of stress seen in the wider markets.

Capital is hard to acquire and easy to lose, and safe haven assets provide a shelter for such capital at times when other riskier assets are prone to sharp price falls or devaluation. Safe haven assets may rise in value in these circumstances, but in general, investors don’t seek gains when they move money into these instruments. Rather they seek to preserve their capital and protect it from loss, as much as is practically possible.

The tendency to move money into or out of safe havens, as they’re known, have been labelled as two so-called ‘animal spirits’ – Risk-On and Risk-Off. When investors are in a Risk-On mood, they are prepared to hold higher-risk assets to achieve greater returns. When their mindset changes to Risk-Off, investors tend to shift their focus to capital preservation instead of holding riskier assets.

The image below shows us a simplistic plot of the risk-reward characteristics of various asset classes and shows how these relationships break down into four distinct areas. 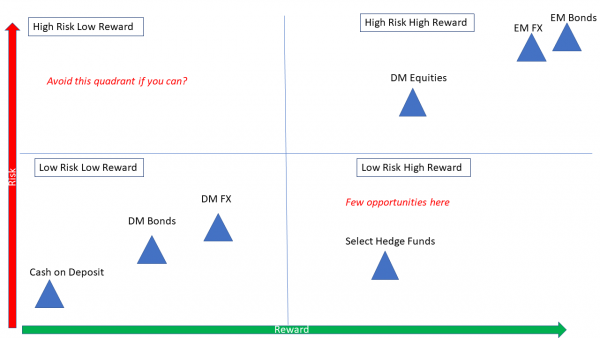 Safe haven assets would typically reside in the bottom left-hand quadrant of this chart, and, as we noted above, can take the form of commodities and financial instruments.

Let’s take a look at these assets in more detail.

The US dollar is the world’s global reserve currency, a status which was inherited from the British pound after the end of WWI.

As such, it enjoys unrivalled liquidity and is the foundation upon which almost all FX prices are based.

The dollar represents the world’s largest economy and is managed by its most formidable central bank; the Federal Reserve and the US Department of the Treasury.

These institutions effectively backstop the US currency in the mind of investors who feel comfortable parking their money in dollar assets in times of crisis. It is to the extent that even if there’s negative news about the US and its economy, the dollar can still strengthen due to capital moving into the US currency and then into US government bonds, the original safe haven assets.

Bonds are effectively a securitised ‘I Owe U’. Bond issuers borrow money for a fixed period from investors, who are promised an annual coupon or interest payments over the lifetime of the bond and full repayment of their loan at the end of the bond’s lifetime.

Bonds are ranked, rated and priced based on a variety of factors, but one of the most important of these is the credit rating or creditworthiness of the borrower.

In fact, as recently as July 2017, investors were happy to own German government bonds with a negative yield. In other words, investors were effectively paying to own these assets rather than being rewarded for their ownership.

Gold and Other Precious Metals

Precious metals are revered for their rarity and lustrous sheen. These qualities have helped turn gold and silver into the first international mediums of exchange, and with standardisation and guarantees about the purity of the coinage, the first real money was in the ancient Mediterranean kingdom of Lydia.

The universal recognition of gold and silver as a means of exchange and a relatively portable store of value meant that the two precious metals became increasingly interwoven into the global financial system.

It was only in the early 1970s that the US abandoned the link between the dollar and the price of gold. You may be surprised to learn that Spanish Pieces of Eight had been the US legal tender until 1857.

Gold went on to become synonymous as a go-to hedge against inflation or devaluation as western economies moved through cycles of boom and bust. In 1981, US inflation was north of 14%, with interest rates touching 20% in that period as we can see below. As inflation undermined the value of money, investors looked to gold and silver to protect their spending power.

Over the last decade, rampant inflation has all but disappeared. However, this hasn’t removed Gold’s safe haven appeal. Some investors remain wary of so-called fiat currencies that can be printed on demand by central banks and, of course, Gold retains a special place in many Asian cultures as gift and store of wealth.

The Swiss Franc and Japanese Yen

These two currencies are classic safe haven assets, but for different reasons. Swiss political neutrality, a strong economy, a highly developed banking sector combined with its location behind the Alps have long made Switzerland a favoured domicile for capital in uncertain times.

After the advent of the Eurozone, Switzerland offered investors European – but not euro – currency exposure. In fact, at the height of the Euro crisis in 2011 so much money was flowing into the Swiss franc (or CHF), that the Swiss National Bank introduced a currency peg against the Euro to try and weaken their domestic currency.

In 2014, the SNB turned to negative interest rates to dissuade traders from holding the franc to no avail and, on January 15th, 2015, the central bank abandoned its Euro peg, allowing the Franc to find its own level against the single currency.

Much like Germany, Japan was reconstructed post-WWII through the deployment of the Macarthur plan.

The Japanese economy and system of government were effectively restructured and its industrial capacity rebuilt from the rubble. As you can see in the chart below, this reconstruction, in combination with a strong work ethic, allowed Japan to catch up with western economies in two decades. 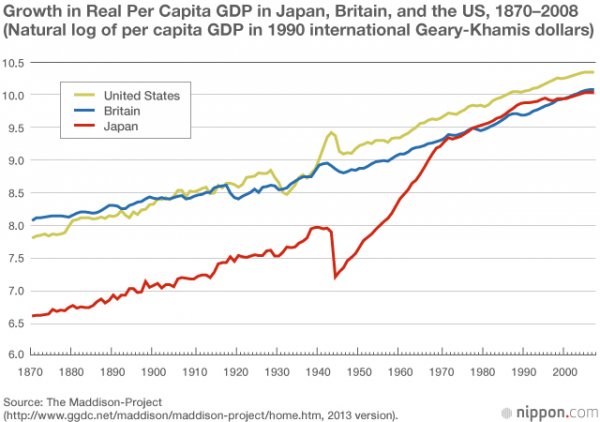 The Bank of Japan, which oversaw this rapid growth, became a highly respected central bank and enjoyed growing credence with the markets as a result.

With the emergence of global Forex trading in the late 1970s and early 80s, the yen was established as a major currency, becoming – and remaining – one of the most liquid financial instruments in the world.

It is this liquidity – the Japanese yen accounted for almost 22% of daily FX turnover in the most recent BIS survey – that attracts investors into the currency in times of distress or when Risk-Off is the prevailing sentiment.

This sentiment is taking hold as I type. While President Trump suggests hundreds of billions of dollars of new tariffs on Chinese goods, Risk-On assets such as equities have sold off, while the Yen has appreciated against the US currency.

As more discussions around trade and tariffs unfold, so will the prevailing trader attitudes and should Risk-Off sentiment continue to hold the upper hand, we’ll likely see the Yen strengthen, equity indices sell-off and money leave the Emerging Markets looking for new safe haven homes.