Top Down not Bottom Up

FX or Forex trading is one of the engines of global financial and economic systems. The decision by the United States in 1971 to allow the Dollar to float freely rather than be pegged to the value of Gold, effectively gave birth to both our modern financial markets and the global capital flows that we have come to take for granted today. Foreign Exchange trading made that evolution possible. Innovations developed within the FX market, continue to influence both the global economy and wider markets to this day.

In Part 1 of this two-part series, we will compare Forex to other financial instruments and products as well as the exposures, investment themes and factors affecting FX trading. In part 2 we will examine the advantages of FX trading compared to trading in other asset types.

A Catalyst for Modern Markets

For many years FX was seen purely as a tool for the facilitation of global trade, and one that was tightly controlled. But the move to floating exchange rates sounded the death knell for exchange controls in developed economies, though they do still exist in some developing markets today. Once capital was able to move freely around the globe, FX became a vehicle for speculation and investment in its own right, rather than just the lubricant for global commerce. At that point, FX trading became synonymous with a “Global Macro” based approach to trading.

The label Global Macro refers to a big picture, top-down style of investing, that came of age with George Soros’s 1992 bet against the British Pound, and the UK’s continued membership of the ERM (a prototype version of today’s single currency). Soros chose to use the FX market to back his view that UK’s membership of the ERM was unsustainable. He sold $10bln worth of Sterling to make his point. As history records, he was proven to be right and the UK exited the ERM on September 16th, 1992. Soros banked a personal profit rumoured to be around US$1.0 billion. That trade brought home just how powerful a proposition, a well thought out strategy and a well-executed trading plan could be for FX traders. Not surprisingly interest in FX trading grew rapidly after these events.

Trading Economies: One Against The Other

Soros and other Global Macro Hedge Fund managers of the time highlighted and popularised the idea that Forex markets allowed you to trade the relative economic performance of, and investor sentiment toward, one economy over another. In fact, that idea is fundamental to any Forex trade, because when you trade Forex, you take a view on the performance of two currencies; one that you are backing and one that you are laying, or betting against.

That’s why when we talk about FX trading we often talk about pairs, such as Dollar Yen, Euro Dollar, or Dollar Swiss. The prices for these pairs are known as FX rates, and those rates express the market’s views on the merits of one currency over the other, at a particular moment in time.

Of course not every FX trade is driven by Global Macro strategy, some may arise from a need for a foreign currency, with which to pay a bill or settle an invoice, or the need to hedge an existing FX exposure or liability. However, Global Macro themes remain the principal driver of longer-term price changes in FX markets and generate much of the volume therein. Even twenty-six years after the events of Black Monday, FX remains the pre-eminent vehicle for making the big picture, top-down trades, based on global economic conditions and changes therein. That’s something that many other asset classes don’t allow you to do.

If FX is a top-down broad-brush way to play macro themes (which it is), then equity investing and trading can be characterised as a granular and bottom-up process where traders can back or bet against much more specific trends and themes. For example, if you were concerned about the health of the European banking sector, then you might choose to sell the Italy 40 index, which has seven constituents from the banking sector among its components. Alternatively, if you believe the Chinese economy is going to show an unexpected growth spurt, you might well buy the UK 100 and Australian 200 indices, for their mining and Asian banking exposure. Foreign exchange exerts an influence over equities and equity indices through its use in overseas trade. Quite simply, weaker local currencies are positive for export-led economies because they make goods and services from that economy cheaper to foreign currency buyers. That translates into more sales for exporters, more sales means better earnings and rising share prices, which in turn push equity indices higher. 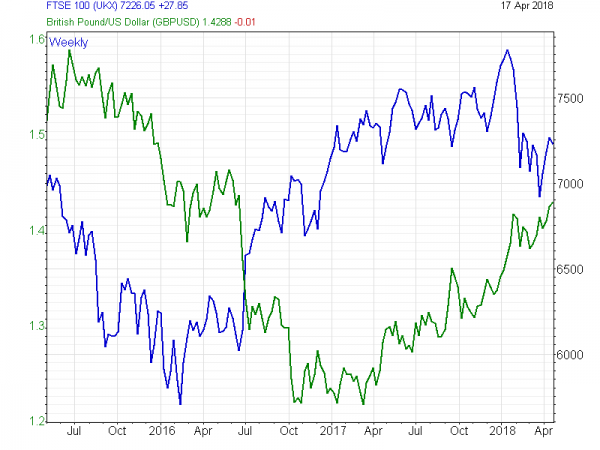 Examples of stock indices that are sensitive to currency fluctuations are the Germany 30, the Japan 225 and the UK 100 indices. The UK 100 index constituents earn more than 70% of their revenues overseas, much of that hails from the USA, and so the USD GBP or Cable rate directly influences the performance of the index. These types of relationships give rise to pairs trades; two-legged trades that back or bet against a currency and it’s related indices, or trade a specific ratio between them. Because of the size of capital flows into and out of these types of trades and their circular nature, it’s not always easy to tell whether the index drives the currency or the currency drives the index. There are other inverse relationships between equities and FX  as well. For example, most equities are seen as being “Risk On” instruments, while currencies such as the US Dollar, Swiss Franc and Japanese Yen are viewed as safe havens in times of financial stress, and therefore as “Risk Off” instruments. This particular dynamic has been less obvious over recent times, but it’s unlikely to have gone away for good.

As we discussed earlier, FX is often about big picture macro themes, and by investing in a particular currency, a trader gains a specific country exposure. In fact, they gain exposure to two countries whose currencies make up the FX pair or cross, that our trader buys or sells.
In doing so, they go long one and short the other. For example, if they buy Dollar Yen, they are said to be going long the US Dollar (America) and short the Yen (Japan). Those are the binary terms that FX exposures are seen in, by the FX markets. Some currencies can also offer you an exposure to other factors and themes through their association with particular commodities. Something we explored in the Trader’s Guide to Commodity Pairs.

For example, the Brazilian Real has an inherent exposure to many of the country’s raw materials, which are exported around the globe. These include Iron Ore, Copper and Gold, as well as Coffee, Sugar and associated bi-products. What this means is that it’s possible for FX traders to gain exposure to commodities through a position in a given currency. Further price changes in another, perhaps an unrelated currency (most usually the US Dollar) can influence commodity prices and, by extension the value of the local currency.

A weak Dollar has historically been seen as being positive for commodity prices and vice versa. Oil, Gold and metals such as Copper, tend to be the most sensitive to these changes. But moves in the Iron Ore price can affect the Brazilian Real, and the Australian Dollar, for example. Exposure to commodity-related currencies gives you a broad-brush participation. But if you want to be more specifically or directly exposed to changes in individual commodity prices, then you will probably want to have an exposure to the underlying items. Details of the cash-settled commodity CFD contracts we offer can be found here. As with interest rates and the prices of Bonds, changes in the price of widely traded commodities (both now and into the future) can influence FX price formation and performance, though generally to a lesser extent than is seen with interest rates.

FX and Bonds are closely linked through the mechanism of interest rates. As we have discussed before, money flows to those areas where it can receive the highest real returns. Those flows are only tempered by the attitude towards risk of money managers, traders and investors. Remember that the interest rate differentials between countries and currencies are one of the cornerstones of FX price formation. And in particular, that it’s future expectations about interest rates that can have the biggest influence on this process. Now let’s remind ourselves of the fact that bond prices move inversely to interest rates, that is to say that as interest rates rise bond prices fall, allowing their yields to rise and compete with cash deposit rates. 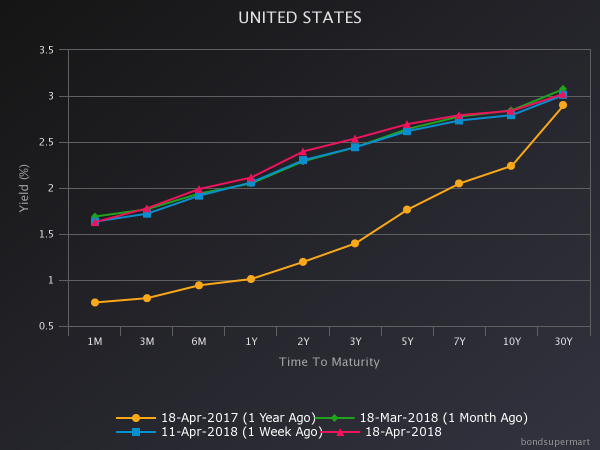 Higher interest rates are price positive for a local currency but are likely to have a negative impact on the prices of bonds, denominated in that same currency. Bond markets and bond prices reflect the anticipated future path of interest rates in that local currency through their yield curve (see above), and therefore influence the price formation of FX rates for a currency versus its peers.

International traders and money managers will often move money into a currency using it as an asset allocation tool. In order to be instantly exposed to these interest rate differentials and trends, through the FX pricing mechanism, traders will often do this in preference to buying individual local government or corporate bonds; the selection of which might well require further analysis or specialist local knowledge. As such, FX sits at the top of an asset allocation hierarchy while bonds are found in the next tier down.

FX trading provides instantaneous exposure to macroeconomic themes at a global, regional and country level. The high-level relationships and investment themes that can be accessed through FX trading are only limited by our imagination as traders, our market timing, patience and financial resources. Although few, if any of us will attain the heights of success enjoyed by George Soros and his contemporaries, we can all trade like Global Macro managers, through the medium of foreign exchange, and the modern trading technology that puts these markets at our fingertips. In part two of this article will look at the advantages that FX trading offers over other financial markets.

Currency Pair of the Week: DXY