Have you ever been stopped out, only to see price reverse from that very same level? Don’t worry: you’re not alone, and here’s why. Many traders tend to place their stops in the same types of places, without sufficiently weighting the fact that they are incredibly easy and worthwhile to hit.

In the grand scheme of things, these stops end up becoming little more than useful liquidity pools for larger players with the firepower to influence future market direction.

What is liquidity? Why is it important?

If you want to buy EURUSD at 1.1000, you need someone to sell it to you at 1.1000. The same thing applies in reverse: if you are selling, you need a buyer. This is just the nature of the market.

“I’m short the dollar and I’ve misjudged my liquidity in the market, I’ve tried to hold the market down, but it’s not going to work. And I can’t buy them back.” “All I wanted to do was to make it through to the Tokyo opening at 7 P.M. for the liquidity. If you really have to buy $3 billion, you can do it in Tokyo; you can’t do it in the afternoon market in New York – you can’t even do it on a normal day, let alone on a day when major news is out.” – Bill Lipschutz, New Market Wizards.

“Liquidity pools” are levels at which price frequently “makes a decision” as a large amount of orders hit the market. They are, so to speak, intersections of orders. This is helpful for managing open trades, initiating new trades, and adjusting stop losses. While it’s impossible to avoid losses in the market, it is important to understand the where and why of the market’s reaction.

How to Avoid Dumb Mistakes

The first order of business when talking about stops is to make sure we are not placing them too close to the market, and thus getting stopped out too frequently on volatility alone. Here are some reasons why traders get stopped out:

We want to avoid getting stopped out for the last two reasons. If we can eliminate obvious mistakes and understand why we are losing, then at least we’re losing intelligently.

This is already a big step ahead of many traders: especially those who don’t know why they are losing in the first place.

The market does not work off of precise levels and exact prices: levels can often be better thought of as “zones,” extending 10-20 pips around a given price point. (Depending on the pair in question, and your broker, you’re already looking at a few pips of variance just in terms of spread.)

Furthermore, it’s quite common for professional and retail traders alike to use swing highs/lows as logical places to place stops and/or reversal orders.

So, depending on the liquidity available in a given “zone”, price can dip into the zone, find orders, and get rejected. In the case above, we would get stopped out of our trade, right where we should be looking for clues on continuation or rejection.

In this example, we are still playing an evidently trending pair, and we’re trying to enter close to the recent range low. However, our stop happens to be within the Asian Range, and hence too close.

Liquidity is often found on either side of the Asian Range. As such, any trade taken in a range-bound situation like the one above should have a stop 15-20 pips outside the range barriers, to prevent being stopped out as a natural by-product of the market’s search for liquidity, or even just pure volatility. 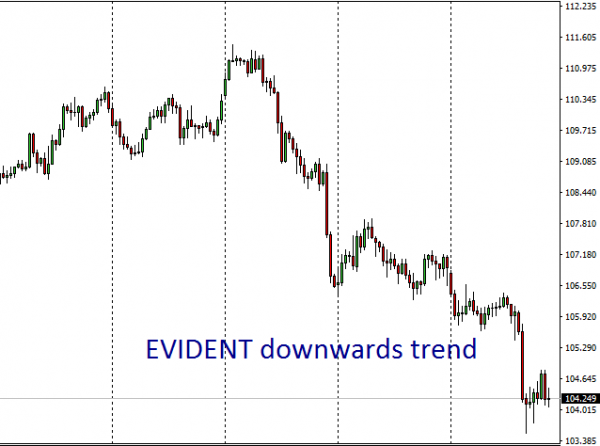 In the chart above, USDJPY is in an evident downtrend. Usually, traders that attempt to fight trends end up losing. The trend is your friend, until it ends. So be patient and play the trends, don’t fight them.

Probably the worst mistake in the book is attempting to trade the market without any kind of sturdy plan in place to deal with the various situations the market can throw at you. If you fail to prepare, prepare to fail.

We previously talked about liquidity pools as intersections of orders. Let’s now return to the point with some more context under our belt.

Common retail traders don’t usually have to think about liquidity, since the market can quite easily absorb orders of up to $10m – far above the sizes they will trade, even usually with high leverage.

Traders who do trade above this size find liquidity to be a very real issue. They cannot think about the markets like common retail traders. Instead, they need to factor in where and how they are doing to deploy their strategy.

They need liquidity in order to deploy their bets without moving the market, and without being detected. They also need to have a clear idea of where they will be able to exit, whether the trade ends up being successful or not.

Large traders (think big funds and Central Banks) cannot simply accumulate or distribute a large position whenever and wherever they wish. Instead, they have to look for those places where liquidity is aggregating, and stops are helping them in an indirect way. Let’s look at an example:

In our example, we had hypothesized a stop inside the Asian Range, and just below a recent swing low on a sub-hourly chart. But many other traders were most likely making the same mistake.

In fact, once price probed below our stop and actually vibrated the Asian Session Low at 1.8400, it most likely hit a liquidity pool where, on balance, continuation “buy” orders overpowered “sell” orders. Don’t worry if this doesn’t quite make sense: it’s about to. 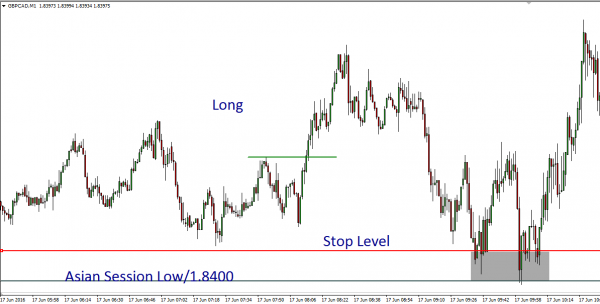 Hence, in the example above, I’m being “forced” to sell because my account is going to do it automatically at that level. Somebody who believes there is value in buying here will want to take over my position, and so now we are flat and somebody else is long. And here’s where it gets really cerebral:

While it’s hard to imagine that your stop being hit can make somebody’s day, the fact is that it’s not just your stop. Imagine a hundred stops, or a thousand stops, being hit in quick succession.

Anybody looking to place a big order has a much safer opportunity to do so without showing his or her hand, or influencing the market too heavily. They don’t have to look or hope for liquidity if it’s already there.

Wherever stop-loss orders aggregate, there is a 2-way pool of liquidity being created. The traders that get “stopped out” are forced to issue opposite-side orders and that gives large traders the possibility to “fade” the stops that accumulate at those levels. 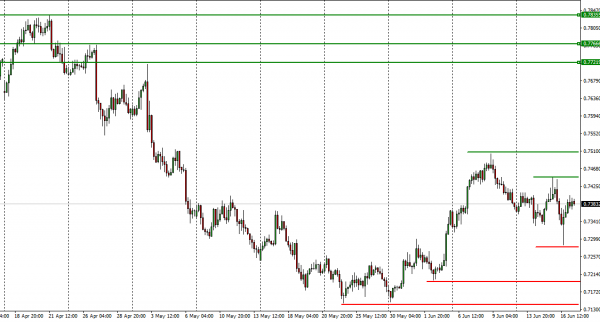 Since people are creatures of habit, they will usually use the same methods for deciding where to place their stops – just below a recent low, or x pips away from market price, for example. As we’ve discussed, those stop orders create liquidity because they issue a market order when they are triggered. 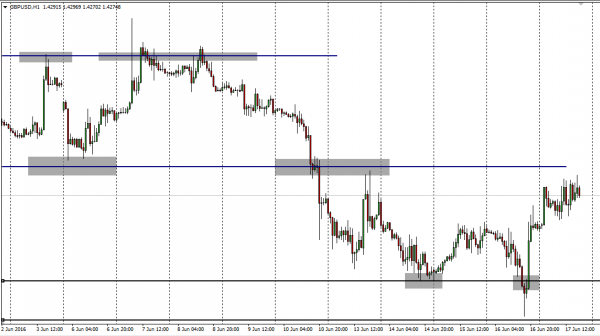 This is a recent example on GBPUSD. We know that fundamentally the market has been heavily discounting a “Brexit” and the Sterling is as volatile as the polls and headlines surrounding Britain’s exit or otherwise from the EU.

The blue and black lines are swing levels from the Daily chart. So with one eye on the drivers, and the other on the charts, potential entry points can be found simply by mapping “evident stop levels”. There is no guesswork here. We are simply observing the market’s reaction upon approach and at the level. 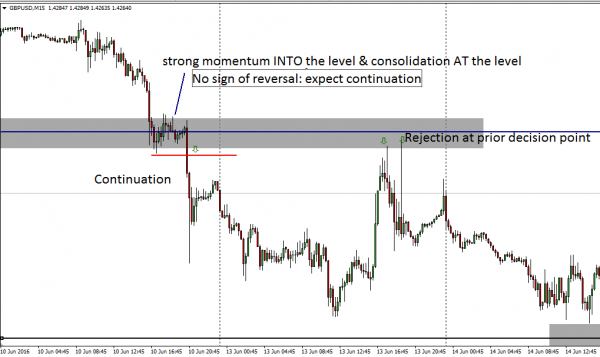 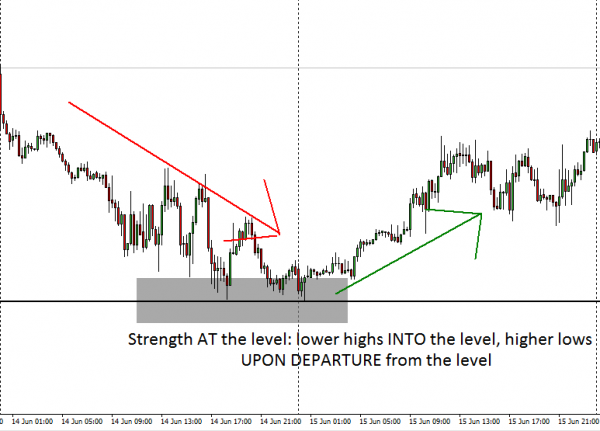 Exploit the Stops (Stop being Exploited)

Don’t get caught with the crowd. Understanding the dynamics of liquidity will help you protect your entries and understand where, on the price map, the market is likely to make important decisions. How?

The key, as with many things in the market, is to keep it simple and subtle.