RSI or Relative Strength Index (often referred to as RSI 14) is an indicator designed to track and compare the current price action in an instrument with historical data gathered on a rolling basis.

The indicator was conceived and developed by J Welles Wilder, an American engineer and property investor who became increasingly interested in the markets and technical analysis of the same. Wilder published his ideas in a 1978 book called ‘New Concepts in Technical Trading Systems.’ The ideas contained within the book (which were subsequently encapsulated in the RSI 14 indicator we know today) have become a cornerstone of technical analysis and technical trading techniques.

What does it measure?

The RSI indicator is what is known as a momentum oscillator. That is, it is used to measure and record fluctuations in price action. More specifically, to measure and record the momentum or velocity of that price action and to express that value as an index. The RS or Relative Strength portion is derived by averaging price gains and price losses over the reference period. The figure is then compared to the same measurements extracted from a series of rolling prior periods (most typically 14 periods) and is expressed as an indexed or rebased value, relative to those prior periods.

How does it work?

The indicator aims to highlight peaks and troughs in price momentum. That is the degree of acceleration or deceleration contained within price changes. This factor is said to move independently of price. By tracking and quantifying the changes in price momentum and providing a historical context or framework against which to compare those changes, Welles Wilder aimed to create a tool that could alert traders and analysts to potential inflexion points in price action and divergent action from previous historical trends. It included those that occur between the direction of a change in the price of an instrument and the direction of the RSI 14 indicator. Or that between RSI reading, calculated over differing time frames.

As we noted earlier, the indicator compares current price action against that captured or calculated for a series of rolling historical periods. The current RSI value is then expressed as an index or percentage value, set between 0 and 100. Using RSI to measure and quantify price action can be considered akin to monitoring the rate of change in unemployment, within an economy rather than the absolute unemployment figure itself.

One of Wilder’s other key insights was to identify the areas at which RSI indicated potentially overbought and oversold conditions within price action. In essence, these were levels that suggested that a price had either risen too quickly or fallen too fast when compared to the historical backdrop.These Readings may also mean that “price” might, therefore, be due for a correction.

The absolute boundaries of the RSI indicator are set at 0 and 100 (shown in the graph below). However, the oversold and overbought levels, identified by Welles Wilder are found at readings of 30 and 70 respectively. Wilder believed that readings at these points indicated a top or bottom in price action, within the period under observation. This meant that the underlying price might lose directional momentum or change direction completely. 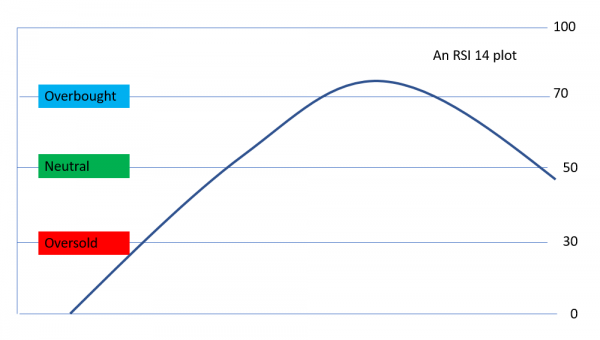 The theoretical oversold and overbought boundaries for RSI are highlighted on the image above, along with a simplified plot of the RSI line. Readings around 50 are considered to be neutral. Those at 70 or higher are classically seen as overbought. While those below 30 are seen as being classically oversold. However, it’s important to note that these oversold and overbought labels refer only the RSI reading and not the price itself.

A price can continue to rise or fall regardless of the RSI reading it has generated. This trait is known as overextension. While it would be rare for the RSI reading to overextend to either the 0 or 100 bound, it is theoretically possible. It’s not uncommon to see RSI readings above and below 70 and 30 respectively. At these points, traders would be “on alert” for a trend change, but they could also be considering factors such as an imbalance in the levels of supply and demand, or other forces which could create the conditions for an overextension.

Even in these circumstances RSI can offer some guidance or help to shed light on what will come next. This is thanks to the fact that RSI readings vary across time frames.

The RSI 14 on a 5-minute chart of an instrument, is likely to have a very different reading to that measured over a daily time frame. In the same instrument. It follows that shorter-term RSI reads are more sensitive or faster reacting than peers, which gather their data over longer periods of time.

A daily plot of Cable(GBPUSD) 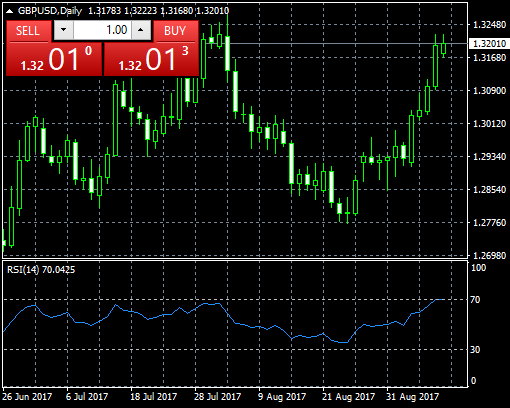 We can see this trait in action if we examine the daily and five-minute plots of Cable which have their RSI readings displayed in a lower chart. See the charts above and below.

In the case of the daily chart of Cable, the RSI 14 has a reading of 70. While in the five-minute chart of the same FX rate, the RSI reading is considerably lower and printing around the neutral midpoint of 50.

A five-minute plot of Cable(GBPUSD) 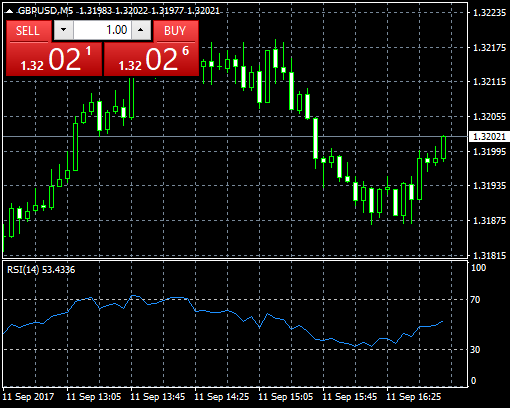 Monitoring changes in RSI over multiple time frames, for the same instrument, can provide traders with a picture of how the price is likely to perform within those time frames.

The divergence between RSI readings over differing time frames can act as an early warning system. Using the examples above, shortly after those charts were drawn, RSI 14 on the Cable 5-minute chart started to fall away into the mid-40s, and the Cable price followed suit.

There were also downside moves in RSI across several other time frames out to an hour. The read on the four-hour chart remained above 70, from which you could conclude that a short-term correction in the price of Cable was probably justified. Traders can also look for divergence between RSI readings and the direction of the underlying price.

Welles Wilder encouraged traders to watch for those instances, where for example, the price of the underlying instrument prints a lower low, while at the same time RSI records a higher reading. This is known as bullish divergence. The RSI has not “confirmed” the lower low, instead, it has suggested that we will see strengthening price momentum.

A bearish divergence occurs when the underlying price prints a new higher high, while the RSI prints a lower low. In this instance, the RSI does not confirm the new high and instead suggests that price momentum may be fading or running out of steam.

However, there is a caveat: Which is that it’s important to note that RSI is prone to generating, what ultimately turns out to be, false divergences, within pre-existing/strong up or downtrends.

Indeed other noted Technical Analysts have gone so far as to classify these “false divergences” as being reverse indicators. Or if you prefer signals that confirm the validity of the underlying trend, rather than countermanding it. This type of behaviour helps to explain why RSI 14 is rarely deployed in isolation. But instead, it is often used in conjunction with other indicators, or over varying time frames, to provide confirmation of an impending change in price action.

Summary how to use RSI in trading

The chart below is a simple 15-minute plot of GBP USD with RSI in the lower chart.

I have highlighted (in red) some examples of RSI hitting a short-term peak or trough, shortly after which the underlying price reacts by moving in the opposite direction. In these cases, RSI has acted as an alert to a possible trend change. On the right-hand side of the chart, I have flagged an example of overextension (in yellow), where RSI rises to and through the overbought level of 70. At the same time, underlying price continues to rise. The RSI 14 subsequently peaks and heads lower, but the underlying price of Cable makes a new high. A clear case of bearish divergence (highlighted by the magenta arrow) and a valid one at that in the absence of a clear pre-existing trend over this timescale.

RSI is often used in conjunction with other indicators to provide a warning or confirmation of changes in price action. One of the most popular pairings among traders is to combine RSI 14 with the MACD or Moving Average Convergence Divergence. MACD is used because it tracks a different aspect of price action from the RSI 14 indicator. MACD endeavours to gauge the strength of the price movement rather than the momentum which is tracked. An analogy may help to highlight the difference; ee can consider MACD as the amount of energy an athlete expends when running, while RSI would be equivalent to the speed/acceleration they attain when they do so.

If we could detect that an athlete’s energy levels were rising or falling, then we might expect to see a subsequent change in the athlete’s speed. MACD measures the strength of price change by comparing the performance of two moving averages on the price of an underlying instrument.

Classically these moving averages are calculated over two-time frames of 26 periods and 12 periods. The MACD value is derived by subtracting the 26-period value from the 12-period figure. A signal line is also created through the calculation of a 9 period MA of the MACD value. Bullish and bearish signals are generated by movements of the MACD line above or below the signal line. The divergence between the price and the direction or trend in the MACD is often considered to indicate the end of a price trend. Traders also look for sharp divergence between the MACD line and the signal line which can, for instance, indicate that an instrument is overbought and likely to correct lower.

RSI 14 is a useful and widely used indicator that can provide traders with an insight into the behaviour of price and price action, such as when the price is being chased higher or lower, and those instances when price action overextends to either the up or downside. If used in isolation the RSI indicator provides a broad guide to possible tops, bottoms and trend changes. However when used in combination with other indicators or when viewed over multiple time frames, it provides a greater degree of granularity about what may happen to price action in the near future. Allowing traders to position themselves in anticipation of the end of one trend and the possible start of another. If you are not currently using RSI 14 as part of your trading strategy why not add the indicator to your charts to see if it adds value.