Wall Street has extended its winning streak for the fourth session, with Europe also trading higher. The Dow has crossed over the 25,000 mark again with the S&P 500 trading above 2760 at the time of writing.

Investors continue to shrug off trade war concerns and outlook for tighter monetary conditions, focusing instead on signs of improving global economy. But things could change from Friday when the G7 meeting gets under way. Trade relations between the US and the rest of the world have deteriorated badly thanks to Trump administration’s increasing preference to protectionism. Inventors better hope that the G7 meetings, which are attended by finance ministers and central bankers from 7 industrialized nations – Canada, Italy, France, Germany, Japan, UK and US – will quell what is becoming a hostile atmosphere in trade relations.

Meanwhile the economic calendar is fairly light today and will remain that way for the rest of the week. But it has been a good few days for Australian, UK and US data, with Eurozone numbers also not being not bad either. Among other things, we have seen the UK scoring a hat-trick of better-than-expected PMIs with the manufacturing, construction and services sectors all showing decent numbers. From, Australia we have had stronger-than-expected retail sales and GDP, with the latter showing a solid 1% growth in the first quarter and growth in Q4 was revised higher to 0.5% from 0.4% reported previously. Last week, Eurozone CPI came in sharply above expectations, rising to 1.9% from 1.2% previously. This was followed by better-than-expected US personal spending, core PCE price index, ISM manufacturing PMI and of course that strong jobs report on Friday which showed employment had risen by 223,000 in May with average hourly earnings rising by a better-than-forecast 0.3% on the month.

These macroeconomic pointers have helped to reduce concerns over a slowing global economy and offset worries over global trade. Investors are also not too alarmed about the prospects of tighter monetary conditions, at least for now anyway.

Looking ahead to the rest of this week, the economic calendar doesn’t get any busier but we will still have a few potentially market moving data to look forward to, including trade figures from China (Friday) – which could give US President Donald Trump excuse to defend and push ahead his protectionist policies – and employment figures from Canada (Friday). Next week is even more interesting as we have three major central bank meetings – Federal Reserve, European Central Bank and Bank of Japan – to look forward to, along with key consumer inflation data from both the UK and US, with the former also publishing its latest earnings figures. We will also have key employment figures from Australia along with Chinese and US industrial productions numbers. 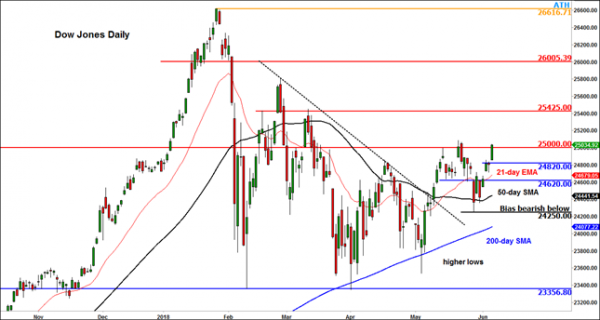