After yesterday’s big reversal in the stock markets, the pressure on safe haven yen eased a little. As a result, the USD/JPY was able to extend its gains for the third straight session on Tuesday. But the momentum has faded again and at the time of writing the USD/JPY was trading lower, consolidating its gains from the past few days. One of the reasons behind this pair’s weakness today is the fact that there was no immediate follow-through in buying pressure for European stock indices. On top of this, the dollar was hit by weak producer inflation figures, and as investors awaited the publication of key CPI data tomorrow.

Still, yesterday’s turnaround in the stock markets could turn out to be a significant outcome as far as the near term direction is concerned for USD/JPY. If the buyers step in and we see some further follow-through once US investors come to their desks then this could see the USD/JPY resume its recovery. However, if the stock markets were to drop again then all bets would be off.

From a macro point of view, Friday’s jobs report, which showed a strong pickup in wage growth, boosted the probability of two further rate increases from the Federal Reserve before the year is out. A rate hike in the Fed’s next meeting at the end of this month is a foregone conclusion. But now a December rate hike is looking increasingly likely, despite recent criticism of the Fed by President Donald Trump. But you do have to wonder how much of the positivity has already been priced in and consider the prospects of a drop in the value of the dollar.

Although the economic calendar is light today, we did have some producer inflation figures released earlier. Both the headline and core versions of Producer Price Index (PPI) fell 0.1% month-over-month in August compared to expectations of a rise of 0.2% expected. The dollar’s immediate response was to fall.

Tomorrow is the big day as far as US data is concerned, for we have the all-important consume inflation figures to look forward to. Headline CPI is expected to show a print of 0.3% month-over-month while core CPI is seen rising 0.2% on the month. If these figures match or surpass expectations then the USD/JPY could rebound again, otherwise there is a real risk of a correction given that rates haven’t exactly gone anywhere fast in recent weeks.

USD/JPY stuck between a rock and hard place

From a technical point of view, the USD/JPY still looks overall bullish given that its recent higher highs and higher lows are still intact, as it heads towards key short-term support at 112.20/25 area. This area was formerly resistance. Regardless of what the USD/JPY does here, we actually don’t have too strong a view on its slightly longer-term direction while it remains trapped between the 111.75 resistance and 110.40 support. A breakout outside of this range could lead to significant move in the direction of the break. So, if 117.75 breaks then we could see a rally towards 113.00 and potentially higher, while if 10.40 breaks then a drop to the 200-day average at 109.75 would become highly likely. 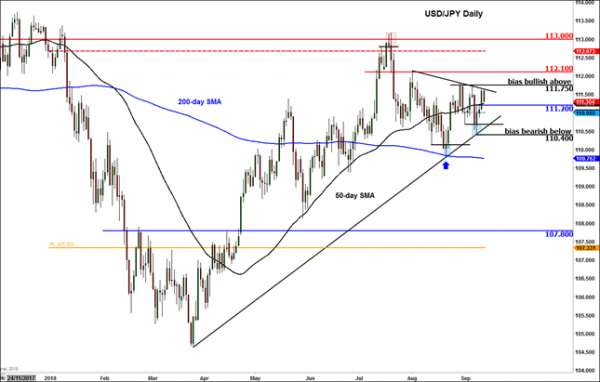