With seemingly every member of the Federal Reserve emphasizing that the central bank would be ‘patient’ following its December interest rate hike, it came as no surprise that the Fed left interest rates unchanged today. And, despite the speculation that Chairman Powell and Company could revisit their balance sheet rundown strategy, the central bank was quiet on that front as well. 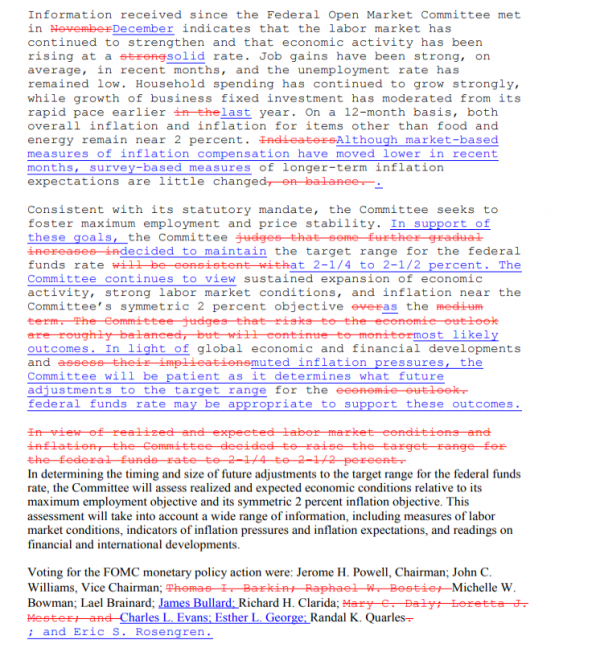 Did you catch that subtle-but-significant shift? In addition to emphasizing its patience moving forward, the FOMC also changed from assuming further increases to interest rates to future adjustments, leaving the door open for potential interest rate cuts if the economy deteriorates in the coming months and quarters.

That’s the big shift that traders have glommed onto, and that’s why we’ve seen a classic dovish reaction to the meeting in markets. Traders immediately bought bonds on the potential for lower interest rates, driving the yield curve down by 2-4bps across the curve. As a result, we’ve seen the US dollar gain a quick 40-60 pips against most of its major rivals, while US stock indices have rallied to fresh 7-week highs. Gold has tacked on a quick 10 points to trade at $1325.

Fed Chairman Jerome Powell is currently delivering his post-meeting press conference, and he is reinforcing the dovish message of the statement. Crucially, he confirmed a Wall Street Journal report from last week by noting that the Fed is evaluating its balance sheet plan and will be finalizing plans at the coming meetings. He also noted that the central bank’s portfolio will be normalized sooner and at a higher level than previously believed.

Essentially, the early interpretation is that the Fed has shifted from a bias toward hiking interest rates to a completely neutral and data-dependent outlook. This represents a major change in outlook from the central bank, and we wouldn’t be surprised to see ongoing weakness in the US dollar and continued strength in stock indices as traders digest the significance of this shift.