Spoiler alert: The Federal Reserve won’t be making any immediate changes to monetary policy at the conclusion to this week’s two-day meeting.

Nonetheless, it would be a mistake for traders to ignore the central bank’s economic projections and comments; after all, the Fed is the arbiter of interest rates for the world’s largest economy and supports a nearly $4T balance sheet. With any central bank meeting (or economic release more broadly), the key factor to watch is how the information compares to the market’s expectations.

So what are the market’s expectations for the FOMC moving forward? In this author’s humble opinion, traders are far too dovish on the path of monetary policy over the course of 2019.

According to the CME’s Fed Watch tool, futures traders are pricing in about a 25% chance of a rate cut by December, in sharp contrast to the Fed’s own projections of two more interest rate hikes in 2019 (as of the December 2019 meeting – we’ll get new projections tomorrow). While we agree that the most likely scenario leaves interest rates unchanged in the 2.25-2.50% range at year end, there’s still a chance that the central bank can squeeze in another rate hike in Q4. 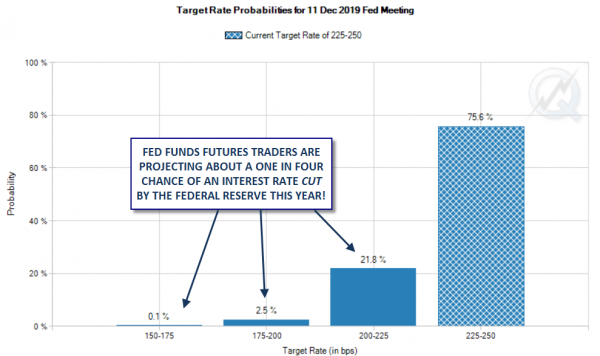 In essence, the US economy has been bombarded with a series of temporary and one-off weak data points, leading to the market’s overreaction:

For a group of professional data watchers that is still obsessively focused on the risks of rising inflation, there’s plenty of reason to maintain a (slight) hawkish lean while waiting for additional data.

As far as what to expect in this month’s meeting, the central bank will likely revise down its forecasts for GDP growth in 2019 (from 2.3%), with potential for a slight shave to the inflation forecasts as well. As ever, all eyes will be on the central bank’s interest rate projections (the infamous ‘dot plot), where the median member may revise down his or her expectation to just one interest rate hike this year – note that this would still be far more hawkish than traders are anticipating.

Finally, the Fed may announce its strategy for ending its balance sheet drawdown (‘quantitative tightening’). The market is keying in on stabilization in the Fed’s balance sheet in the late Q3/early Q4 timeline, so a plan to pause earlier (dovish) or later (hawkish) could lead to a kneejerk reaction among traders.

As far as market moves, we could see a rally in the greenback and a dip in US stocks if the Fed fails to meet the market’s highly dovish expectations. That said, any new information is likely to be marginal (the precise month when QT will end) or distant (the prospects for a rate hike in Q4), so market movements may be limited as traders refocus on the latest Brexit developments and updates on the US-China trade war.