So, the Federal Reserve was even more dovish than we had anticipated and the markets’ reaction was a swift one: a rally in bonds, metals and foreign currencies as yields and the dollar sold off. Equity markets also popped higher after the Fed signalled US interest rates will remain on hold for 2019 and that the monthly reduction of its bond holdings will slow starting from May, with a cut from $30 billion to $15bn, before stopping the balance sheet reductions in September. But after such an unexpected dovish tilt, you would have expected to see further immediate follow-through in momentum for the dollar and stocks. Yet, stocks pared their gains on Wall Street and the S&P 500 finished well off its best levels. In Europe, the German DAX has again started the day on the back foot after selling off yesterday, while the major other EU indices were trading mixed at the time of writing. US index futures were flat-ish. It looks like investors may be concerned at the lack of further progress in US-China trade talks. Donald Trump’s announcement yesterday that tariffs would remain in place for a long time to make sure China complies with any deal may be the reason why stocks have reacted in the way they have. It is also plausible to interpret the Fed’s surprisingly dovish tilt and the downgrade in its economic forecasts as a sign that the world’s largest economy could slow more sharply than expected and that this may hurt future company earnings. However, with most major central banks still keeping their respective monetary policies extremely loose, now more than 10 years since the global financial crisis, the downside could be limited for stocks. Indeed, despite the not-so-bullish reaction to the Fed announcement, the S&P 500 was still holding its own above key support around 2814, which had been a big resistance zone in the past. The technical bias would only turn bearish if the index were to break its most recent swing low at 2722. 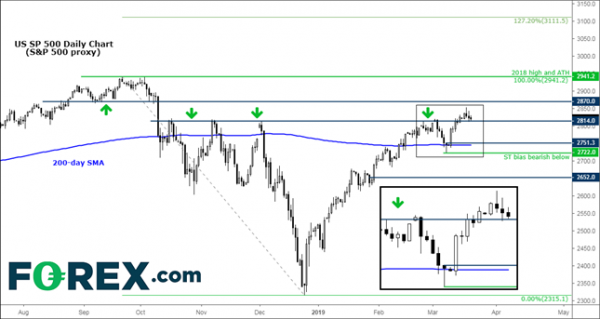