Global capital is flooding into US markets as many traders return from a long holiday weekend.

Traders woke up to news that China may be reeling in its stimulus measures and that President Trump is vowing to reciprocate EU tariffs; despite these potentially ominous headlines, the US economy remains one of the few major countries seeing steady growth, and traders are piling into US assets as a result:

As we noted last week, the dollar index has formed “…a large ‘ascending triangle’ pattern, which could foreshadow an explosive rally if the 97.70 barrier is eclipsed.” Rates peeked above that area at the start today’s US session, though the index has since dipped back below it. A daily close above the barrier, perhaps supported by a strong Q1 GDP report on Friday, could set the stage for another leg higher heading into the summer months. 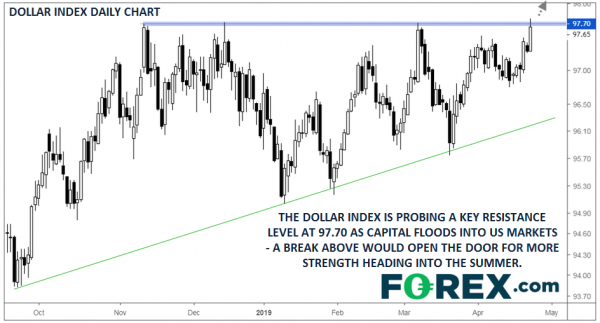 Meanwhile, December’s big swoon is now a distant memory for US equity traders. The total return index (including dividends) has already eclipsed last October’s record high, and the price index is on track for a record high close as we go to press. As we highlighted last week, year-to-date sector performance suggests a healthy bull market.

While Friday’s aforementioned GDP report will certainly impact trade in US indices, the more pressing data will be the ongoing results from the Q1 earnings season. In the next 24 hours, three of the six largest publicly-traded companies on the planet (Microsoft, Amazon, and Facebook) will all report earnings, and the outcome of those reports may determine whether the index can break sustainably above 2940 to usher in the next leg of the long-lived bull market. 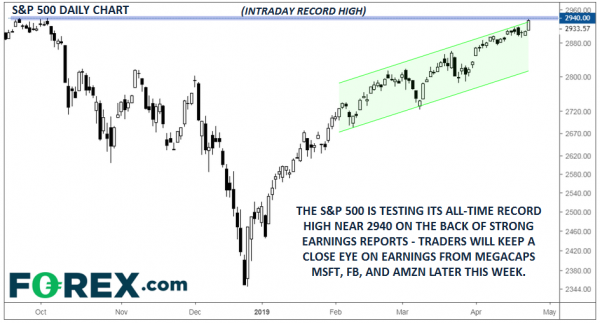