Bruised and battered at 22-month lows, Euro could be in the need of a sympathy bounce before losses continue. If US GDP allows…

A slew of weak data from Europe has continued to weigh on the Euro, although it was weak German IFO data on Wednesday which was the straw that broke the camel’s back and send it to a 22-month low. Data from the US has continued to improve to keep the Euro suppressed at its lows but, as we head towards the weekend, a minor bounce may not be out of the question. 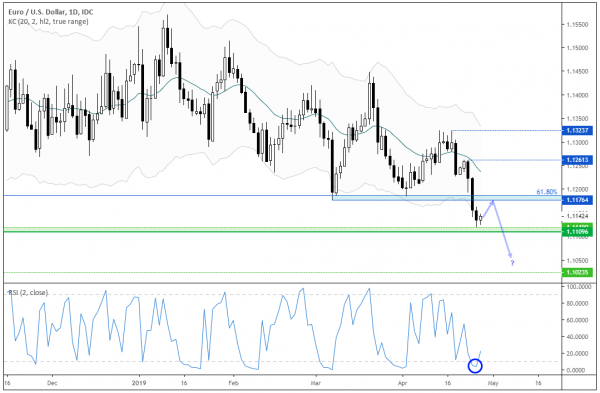 Having found support above 1.1100, the Euro now finds itself within a tight range around 1.1100 – 1.1180. With prices currently trading beneath the lower Keltner band and RSI(2) hitting the very oversold level of 4 yesterday, price action is arguable stretched at the lows. Furthermore, having shed -1.3% since Tuesday its plausible that traders will want to square up ahead of the weekend and book a profit. In some ways we’d welcome a bounce from current levels and wait to see if resistance is found around the 1.1180 area.

However, we also have US GDP data to contend with and expectations are varied. A Reuters poll expects Q1 GDP to fall to 2% (from 2.2% prior). Given Q1 growth typically receives lower expectations, it could take a large marge miss for EUR/USD to truly rally. If so, a close back above 1.1180 todays warns of a fakeout at the lows and could see decent follow-through next week.

The Fed Atlanta’s GBP Now is pencilling in a 2.7%, which is far above consensus. Under this scenario, we could see EUR/USD break below 1.1100. What we’d like to see is something in between the two, as this could allow EUR/USD to consolidate further between 1.1100-1.1180, allowing bears to time a better entry on a move that’s not quite as over-extended.