After an early surge to new 2019 highs, both major oil contracts have given up large chunks of their weekly gains. WTI is down for the third consecutive day, while Brent is down for the second day. Prices were barely hanging onto their now small weekly gains at the time of writing. Prior to this week, Brent had risen for five and WTI for eight consecutive weeks.

Clearly, prices had been technically “overbought” and a correction of some sort was imminent. It remains to be seen how far oil prices will fall given the still supportive market conditions, with the OPEC+ group of producers continuing to restrict supply and the US government tightening sanctions against Iran. On top of this, you have ongoing production outages from Venezuela and yesterday an important pipeline in Russia had to be suspended due to contamination.

Thus, if oil prices were to weaken further, this would either have to be due to renewed fears over demand, perhaps from emerging markets given the US dollar rally, or concerns about rising supply in the US. 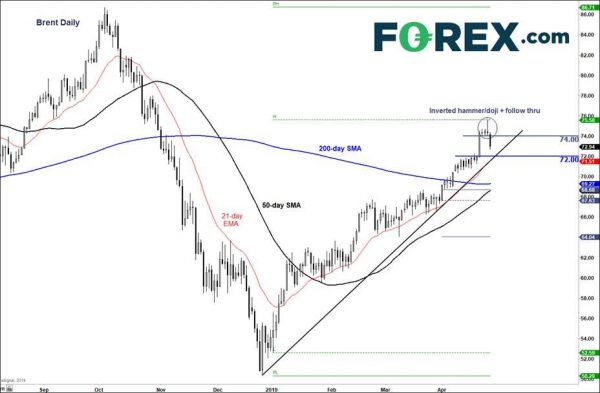 From a technical standpoint, Brent created a potential reversal formation yesterday when it rallied to a fresh high on the year at just above $75.50, before turning around to close lower. As a result, it created an inverted hammer/doji candlestick pattern on its daily chart. There has been some follow-through to the downside today after prior support at $74.00 gave way. This level is now going to be key. If this is a genuine reversal, the $74.00 should hold as resistance going forward.

However, this could just turn out to be a correction rather than trend reversal. After all, the bullish trend line, which comes in around $71.50, is still intact. Ahead of this trend line, there’s potential support at $72.00, a level which was previously resistance.

Therefore, it is far too early to suggest Brent has topped. However, if and when the bullish trendline breaks, only then will the bears have a genuine case.