As promised, the US raised tariffs from 10% to 25% on $200bn of Chinese goods on Friday, and China has vowed to retaliate. Earlier, Trump stated he remained confident a deal can be reached ‘this week’. Despite reports that China’s Vice Premier had left the treasury building and trade talks early, trade talks are set to resume on Friday.

AUD led commodity currencies higher and are today’s strongest majors, as traders look ahead to a no-deal outcome and how it could see the Fed shift from neutral to dovish. JPY is the weakest major following news that trade talks would be extended into Friday. Volatility was contained throughout most of the session, although 5 JPY pairs exceeded their typical daily ranges. Index futures are mostly in the green.

From RBA’s quarterly SOMP (statement on monetary policy): Paying close attention of employment data at upcoming meetings and a lower unemployment is “achievable”. They’ve forecast trimmed mean CPI at 1.5% in June 2019 and for unemployment to fall to 4.75% by 2021. The weakness in housing market is dragging on inflation, and they’ve lowered their forecast for consumption growth. Trade tensions remain a downside risk to the global outlook.

From BOJ’s summary of opinions: Appropriate to clarify forward guidance, such as by mentioning time frame on how long rates will remain low.

On the data front, Japan’s household spending increased by a mere 0.1%, up from -2% prior but below 0.5% expectations. And Overtime pay declined -3.1%, its fastest rate of contraction since Feb 2013. 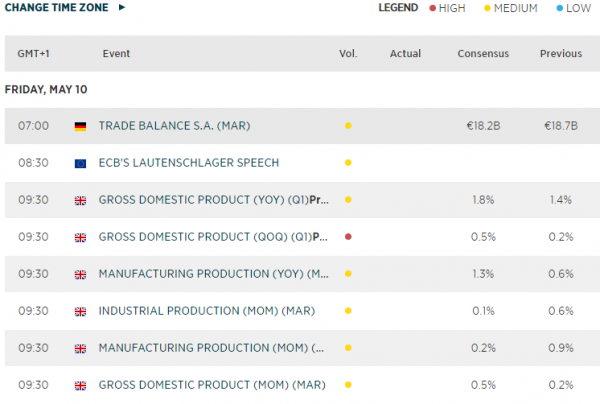