It was a lively session for Europe and US to say the least. Germany’s business sentiment deteriorated with IFO current assessment dropping to its lowest level since 2016 and business climate to its lowest since November 2014. European and German PMI also softened further. This promptly saw the DAX as the weakest index of a bad bunch and helped EUR/USD push to a new low.

Not wanting to miss out, weak US PMI data saw a sharp reversal in the dollar to help EUR/USD bounce back above key support at 1.1100. At 50.6, Markit manufacturing was its lowest since May 2016. Whilst this is still ‘expansive’ above 50, it is only just. Furthermore, as its tracking global PMI lower and signals weaker growth expectations, traders saw a higher chance of the Fed cutting rates, despite the Fed minutes signalling no rate moves for ‘some time’ this week. Regardless, the USD is on the back ropes as we head towards the weekend. 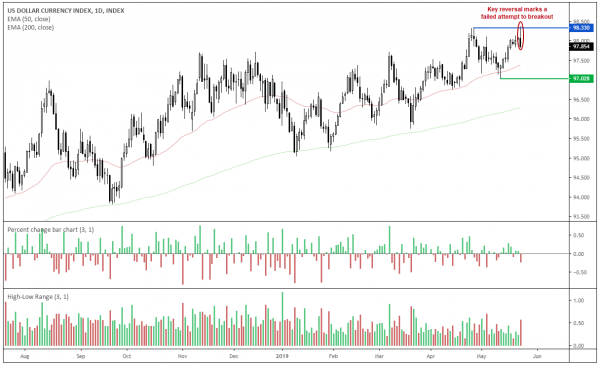 Whilst the US dollar index (DXY) is mostly weighted against the Euro at 57.6%, it remains a proxy for overall US dollar strength or weakness. Yesterday’s bearish outside day was its 2nd most volatile bear-candle of the month. The fact this happened at a key breakout level sends a signal to dollar bulls: USD isn’t ready for a breakout yet. 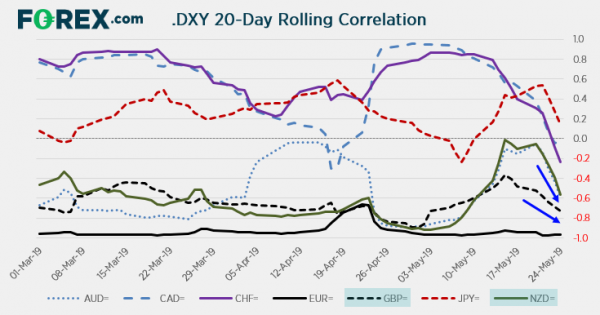 NZD/USD formed a bullish engulfing candle at the lower Keltner