After climbing over 9% in the previous week, crude’s largest weekly percentage gain since December ‘16, the black stuff was extending those gains in early trade on Monday. Oil rallied to a high of $58.21 this morning before easing back to $58.00

Oil’s recent vast rally was not owing to a single driver but more an alignment of several key factors which pushed oil higher and continue to remain supportive at the start of the new week.

Firstly, the escalation of tensions in the Middle East with Iran shooting down a US drone. US Secretary State Mike Pompeo said significant sanctions on Iran would be announced on Monday. These would be in addition to those already imposed by the US on oil producing Iran.

Increased fighting in Iraq over the disputed city of Kirkuk is also unnerving oil traders. Iraq which provides around 14% of total OPEC production.

Secondly the Fed signalling that it is ready to offer more support to the US economy should it be required. This offered support from a demand perspective, and also weakened the dollar. A weaker dollar lifts the price of oil for holders of other currencies.

Thirdly an unexpected drawn down in US stockpiles last wee

Fourthly signs that a prolonged drawn out US – Sino trade dispute might be avoided as the two Presidents agree to meet at the G20 this week.

This week could be another volatile week for oil as the focus switches away from central banks and towards trade geopolitics. Any signs of progress between President Trump and President Jinping Xi could give oil another leg higher as demand fears could ease. Crude to $60 wouldn’t be so surprising.

Finally, oil traders will be watching for clues as to whether OPEC plus will extend the oil production cuts to the end of the year. With oil at its current price, traders are more convinced that the extension will be agreed to that not. Failure for the group to agree to extend could see oil gap down sharply.

After pushing higher last week oil is consolidating around $58 level as it awaits fresh developments. A move higher could see oil bulls test $58.50 prior to $59.00. O the downside, a breakthrough support at $56.65 could open the door to $54.85. 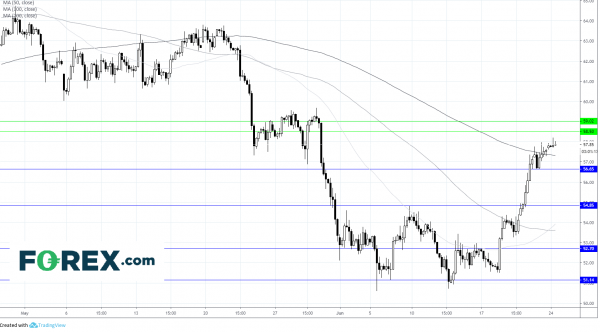