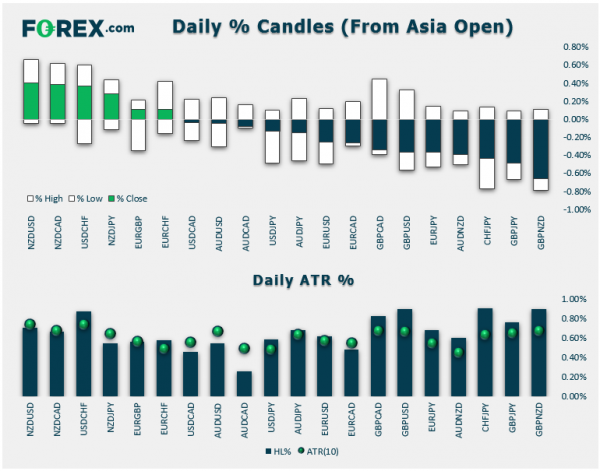 The US dollar recovered its losses after Fed voter Bullard (dove) downplayed a 50bps rate hike next month. Fed Chairman Powell reiterated the less-dovish sentiment, noting that the central bank should not bow to “political interests.”

US New Home Sales (May) fell to a five-month low of just 626k, despite falling mortgage rates. Conference Board Consumer Confidence data (June) also missed expectations at 121.5 vs. 131.0 expected.

Jeremy Hunt, Boris Johnson’s last competitor to be the next UK PM, called October 31 a “fake deadline” for Brexit. The final vote is scheduled for July 22, with BoJo still the prohibitive favorite despite some recent gaffes. The pound was the weakest major currency on the day.

The kiwi was the strongest major currency ahead of the RBNZ’s meeting in tomorrow’s Asian session.

Gold rose for its sixth straight day, peaking near 1440 before pulling back in the US session.