The meetings have kicked-off and volatility remains capped whilst traders await potentially market-moving headlines and trade developments. We take a look at a couple of JPY pairs around the event.

Markets were given a gentle lift in sprits yesterday on announcement that the US and China had agreed to a trade truce ahead of the G20 talks. And today, Trump has since agreed to no preconditions for his meeting with Xi. Whilst these developments do little to confirm talks will ultimately become a success, they’re a step in the right direction and a much softer approach than Trump has known to take ahead of other, key events. That said, Trump has lined up no fewer than nine bilateral meetings for the event, most likely in a bid to pile on the pressure on Xi for a more favourable meeting tomorrow.

For now, markets are on tenterhooks as they await developments of the meeting. However, it’s possible we may have to wait until markets are closed for the weekend before the more meaningful headlines hit the screens, which could leave markets vulnerable to gaps on Monday. But with markets focussed on the success or failure of the Trump-Xi talks, it could have a binary effect on Monday mornings open and subsequent moves. In short, successful talks could see less demand for safe havens (JPY, CHF, gold, bonds etc) and demand for riskier assets (Equities, commodity FX – AUD, NZD, CAD) and the reverse could be true if deemed a failure. 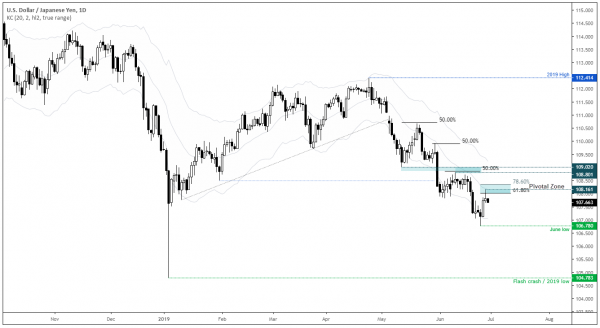 Technically USD/JPY remains in a downtrend, although its seen a retracement from its lows. 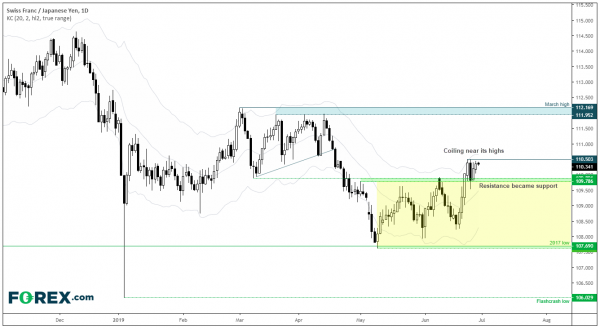 If we were to seek a bullish scenario around G20 talks, CHF/JPY could make an interesting setup, even if less of an obvious choice.