After yesterday’s testimony from Jay Powell, the dollar fell as the Fed Chair more or less confirmed interest rates are going to be cut. Traders are now looking forward to this afternoon’s release of US consumer inflation figures before deciding whether to increase the pressure on the dollar or ease off the gas. The Consumer Price Index is expected to come in at 1.6% year-over-year, down from 1.8% in May, while core CPI is seen unchanged at 2.0% in June. On a month-over-month basis, both headline and core CPI prints are expected at +0.2% vs. +0.1% previously.

Ahead of the publication of CPI, the dollar has managed to bounce off its worst levels, with the USD/JPY for example climbing to 108.15 after dipping to 107.85 overnight. Undoubtedly, some speculators are happy to book profit on their short dollar positions in the event CPI comes out stronger than expected. But given the Fed’s desire to cut interest rates and the technical damage incurred on most dollar charts, the path of least resistance remains to the downside for the buck. So, as things stand, we favour looking for rallies to be faded and supports to break down.

The USD/JPY created a bearish engulfing candle on its daily chart yesterday, and we have already seen some downside follow-through. The key level to watch is around 108.25/35, as can be seen on the hourly chart. As well as prior support, which has now broken down, this is where the back side of the bearish trend line comes into play. So, any move back into this level could be faded today, unless CPI beats expectations by a meaningful margin. 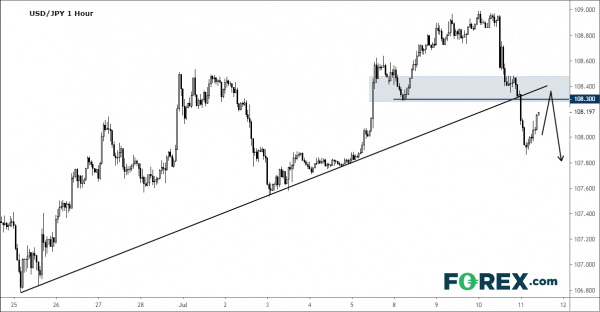 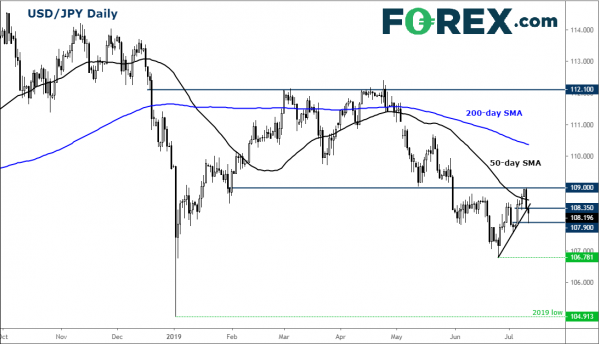 US Dollar Index Plunges Towards an Almost 3-Month Low