China will release its official manufacturing PMI data for Aug compiled by the National Bureau of Statistics on this Sat, 31 Aug at 0100 GMT.

Even thought, most market participants monitor the private Caixin Markit manufacturing PMI (out on Mon, 02 Sep @0145 GMT) as it consists of data surveyed from smaller privately-owned corporates that gives a better gauge on the overall health of the manufacturing sector versus the official one that consists of data from bigger corporations, mostly from state-owned enterprises (SOEs)

Nevertheless, it is still worthwhile to pay attention to the official PMI as the manufacturing activities of the SOEs has started to see 2 consecutive months of contraction below the 50 level; (49.4 in Jun) and (49.7 in Jul) which do not bode well on the health of China economy and the rest of the world. Also, given the on-going trade tension between U.S and China, it will be important to see how such uncertainties impact the manufacturing sector (SOEs) which in turn dictate fiscal and monetary policies from the central government to counter any slowdown.

For the upcoming official manufacturing PMI data for Aug, consensus is set at 49.7, a similar level to the actual data recorded in Jul.

Now, let us look at the breakdown of the various components inside the manufacturing PMI (new orders, new export orders & employment). 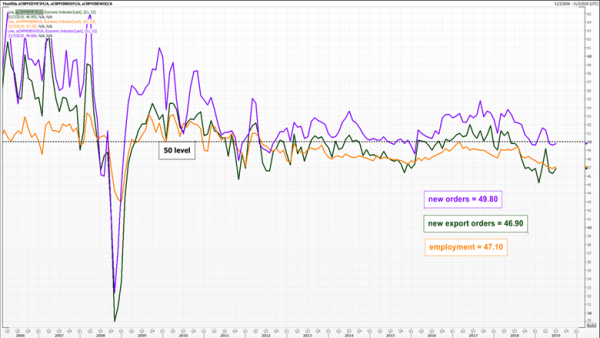 Therefore, it is paramount to monitor the latest data on employment and new export orders components of the official manufacturing PMI data to have a leading gauge on the health of the manufacturing sector (SOEs).

My colleague has written an article on “The Week Ahead” which has highlighted the various assets that can have a significant movement around the data’s release (click here to read).

Let’s us now look at the chart of the China A50, one of the assets.

Medium-term technical analysis on China A50 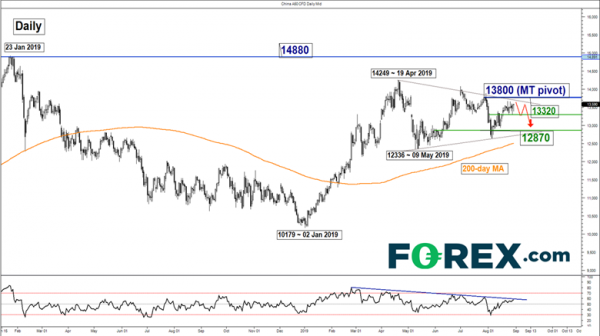 US Clock Goes TikTok, Ahead Of Friday Deadline