Yesterday, we discussed how the Canadian Dollar could be in trouble if WTI Crude were to make a false breakout of its daily triangle formation. Today, the false breakout was confirmed as Trump said he is making plans to meet with Iranian President Hassan Rouhani at the UN meeting later this month. A meeting between the two would be the first step towards easing sanctions on Iran and is generally considered to be negative for the price of crude.

The doji candle in WTI Crude on a daily timeframe yesterday was a candle of indecision. Buyers tried to move price higher, however they were overcome by sellers who pushed the price back down to close unchanged on the day. Today, sellers continued to dominate and price moved back into the triangle, closing down almost 3.70% 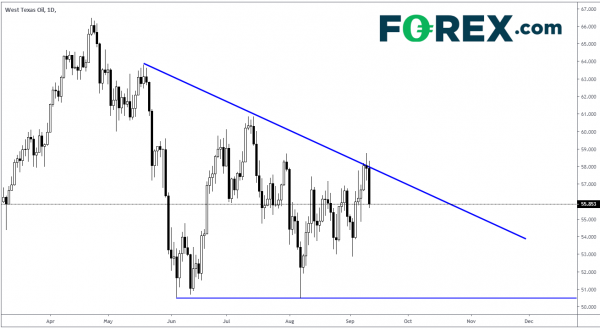 USD/CAD was hovering near the 61.8% retracement support level from the July 19th lows to the September 3rd highs, and with the move lower in Crude today, USD/CAD moved aggressively higher (CAD lower). 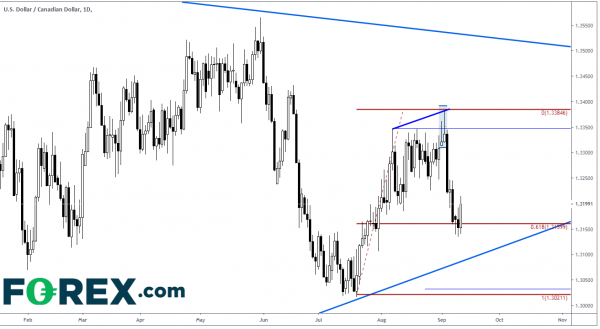 To better illustrate how the two assets move together, below is a chart of WTI Crude and Canadian Dollar Futures. Futures trade in the same direction as Crude, as opposed to USD/CAD which trades inversely to crude. The correlation coefficient today is at +.64 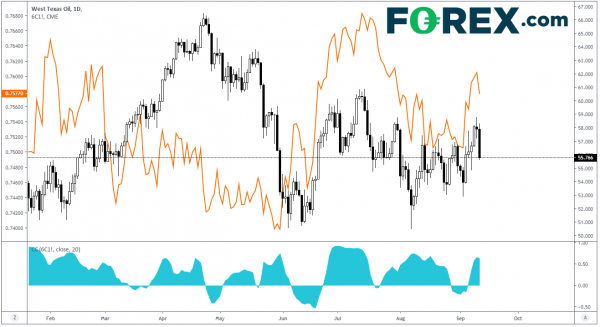 So yesterday we pondered, “What happens tomorrow if Crude reverses its recent move higher and trades lower back into the triangle? If that happened, the Canadian Dollar may trade lower with it (USD/CAD higher). On a 240-minute USD/CAD chart, we noted the RSI was diverging with price, which is typically a signal of a potential reversal. This is indeed what happened as Crude moved lower. USD/CAD traded to a high of 1.3214 and closed up 45 pips today at 1.3197. (The RSI is no longer oversold). Resistance levels remain the same as yesterday, horizontal resistance and Fibonacci retracements between 1.3230 and 1.3260. First support is now horizontal support at 1.3160. Below that support is near 1.3100. 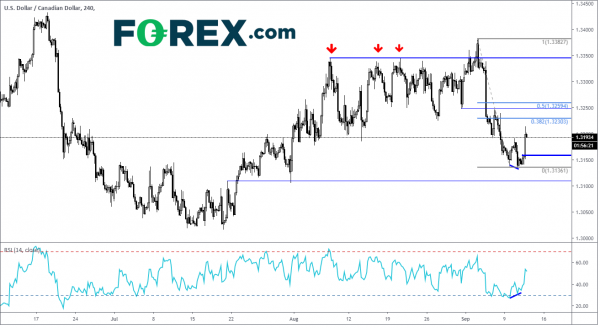