The oil market’s latest drama saw prices accelerating lower in reaction to Saudi Arabia’s Tuesday signal that oil output could ‘return to normal quicker than thought’. Reuters cited an unidentified Saudi source suggesting that Aramco’s Abqaiq and Khurais plants that were badly damaged by the attack would return to full production in the next two to three weeks, with up to 70% of lost production returning sooner.

Several hours later, and four days since the attack, the Kingdom, which is essentially OPEC’s lynchpin, finally gave concrete details of the scope of the damage whilst announcing partial restoration of operations. Saudi now says that production capacity will be back to normal within months. Nevertheless, repairs are progressing slower than initially expected. Officials had initially indicated that the majority of output would be restored within days. As such, an underlying bid has kept crude prices elevated this week.

The damage done by what was suspected to be a drone of unknown origin carrying munitions reportedly reduced output from the plants by half, jeopardising as much as 10% of global output. So far, with efforts focused on the Abqaiq plant, processing capacity has been restored to 2 million barrels a day, according to Aramco, with capacity expected to rise to 4.9 million barrels a day by the end of September, or roughly half of the whole complex’s rate at the end of last week.

Understandably, markets remain jumpy. After the worst-ever single disruption of global oil supply, participants are prone to over-reacting to little news, as seen on Tuesday, when Brent slumped 5% within minutes. The sudden drop corroborates widely suspected concerns about the demand outlook. With geopolitical events having done such heavy lifting in recent days, prices are set to return to sub-$60/bbl. levels seen over the last month or so, when upward price pressures fade.

As we’ve seen though, the most important geopolitical influence on price has been the attack and its fallout. The disruption was sufficiently large to warrant talk of intervention by the United States’ Strategic Petroleum Reserve. Reserves of other countries could be deployed too. But data suggests that the global spare capacity required to replace lost Saudi output on a sustained basis would not currently be available. The graphic below depicts annual OPEC production rates going back to 2019. For clarity, historically unstable Iraqi production is broken out separately. 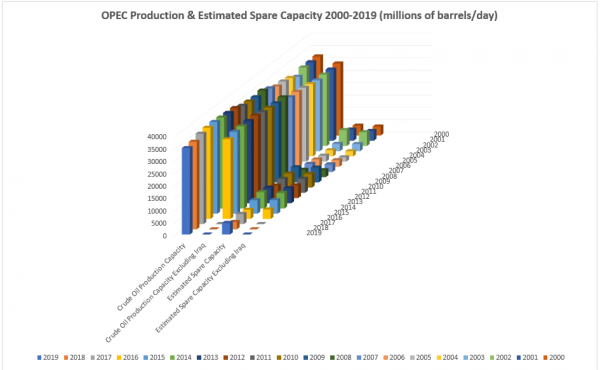