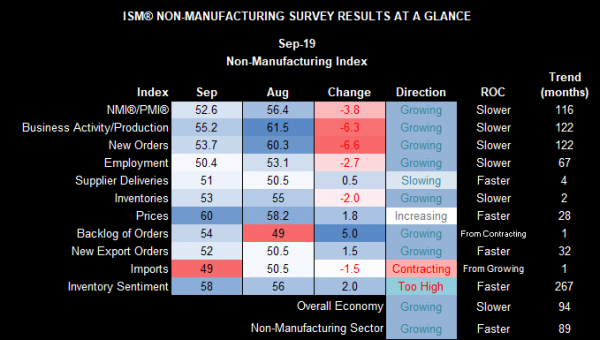 There was more anticipation than usual for this month’s ISM Non-Manufacturing PMI. Why? As it’s much older brother, the ISM manufacturing PMI essentially rolled over and went into the fetal position.

Fears of a global slowdown were already weighing on sentiment ahead of ISM manufacturing sinking to a 10-year low, until the dire number finally saw equity markets roll over from their highs. As we outlined previously, the service sector has remained in growth since the last recession in 2009 whilst manufacturing had sent 2 false recession signals over the same period. Therefore, we’d prefer to see service PMI fall alongside manufacturing to better assess the likelihood of a US recession. And it appears the service sector is now closing the gap to the downside, although the numbers aren’t all that bad. 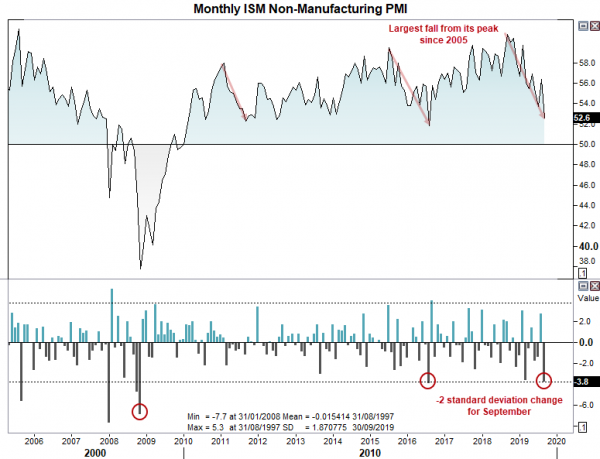 There are a few worrying signs within the service sector, although it remains expansive none the less. 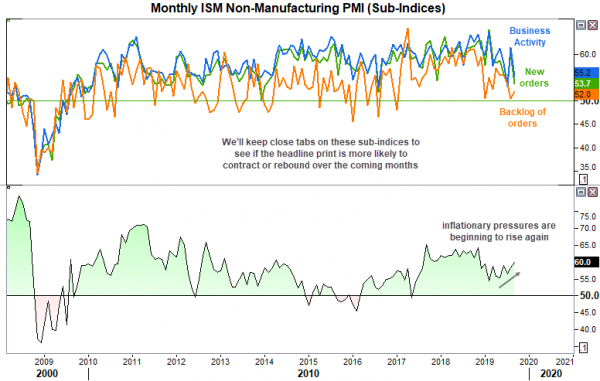 But it’s not all bad. And, unlike the manufacturing sector, there are some good numbers within the sub sectors:

Key takeaway: It may not have been a great month for services by historical standards, but with new orders, business production and backlog of orders remaining expansive, it leaves potential for a bounce. Particularly if US and China sign that famous trade deal. Sure, if we see this move into contraction then the probability of a US recession goes up, but we’d prefer to see if there are signs of weakness in new orders, production and backlog of orders next month before calling Armageddon for the financial markets.

Still, traders have increased the probability of a Fed rate cut this month to 86% from 77% the day before. We think it’s unlikely they’ll pull the trigger on a 50- bps cut simply because they’re easing from the lowest peak in history, and they’d prefer to leave such a move for if or when the markets are truly in turmoil. 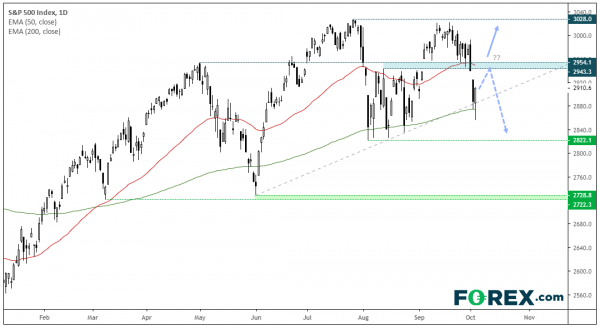 The S&P500 recovered as it headed into the end of the session and trades back above 2,900. An initial sell-off threatened a break of its June trendline, until the 200-day eMA saved the day. A 2-day reversal pattern in form of a bullish piercing line suggests the initial breakdown could have been a bear-trap but we also have the 50-day MA as a likely resistance level. Furthermore, yesterday’s bullish candle needs to be taken in context of the initial decline, so bulls may not yet be out of the woods just yet.