Yesterday, the US imposed sanctions on 28 Chinese tech firms. Today, China’s Liu He said he will not be negotiating on Xi’s behalf. The Chinese delegation will leave a day earlier than originally planned, on October 11th instead of the 12th. The White House is looking to limit Chinese stocks within government pension fund. China is mad at the NBA. All negative headlines! How can any kind of trade deal get done with all the negative headlines coming out today from both China and the US? At least, that’s what USD/CNH was thinking today, up almost 0.45%!

USD/CNH began its uptrend when it put in a triple bottom between February 25th and April 17th at 6.6745. However, it moved higher in earnest on July 26th and put in new highs on September 3rd at 7.1955. This level is just above the 161.8% Fibonacci extension from the highs on October 31st, 2018 to the previously mentioned triple bottom lows. Since those early September highs, price has traded down to 7.0309 on September 13th, and has been moving slowly higher since then, hugging a rising trendline which goes back to July 25th. The candlestick today was also a bullish outside candle, encompassing the entire candle from yesterday. 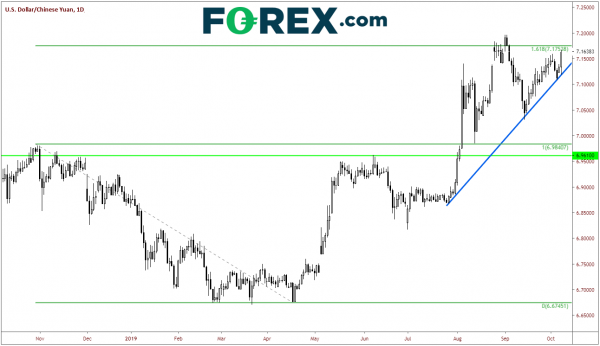 On a 240-minutes timeframe, price broke out of a symmetrical triangle and is currently testing the 78.6% Fibonacci retracement level from the highs on September 3rd to the lows on September 13th at 7.1638. Above there, USD/CNH can head right up and test previous highs at 7.1992. First support comes in at the broken trendline near 7.1535 and then will look to fill the gap from Friday’s close at 7.1135 (and contend with the upward sloping trending near that same level). 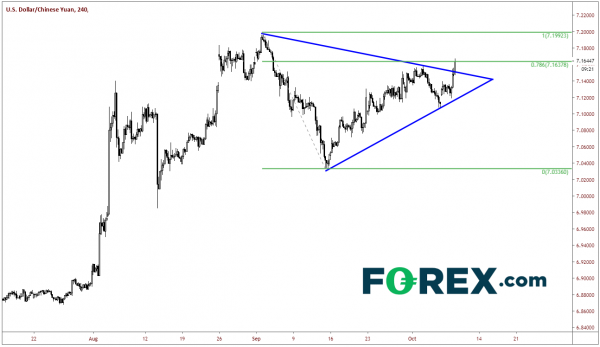 If the rhetoric and headlines continue to be negative towards a trade deal getting done over the next few days, watch for USD/CNH to continue higher and possibly at a more rapid pace.