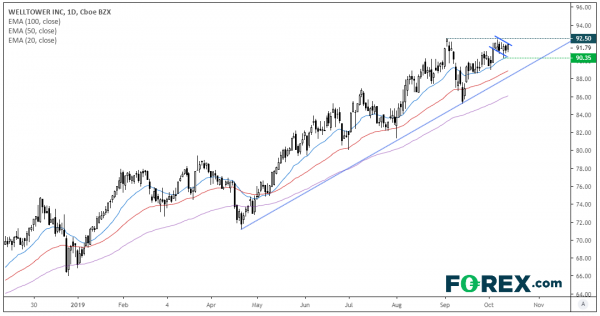 Welltower Inc CFD/DFT: The stock remains in a strong uptrend and is now consolidating just beneath record highs. The 20-day eMA is holding as support and we’re now watching to see it can break out of compression to new highs. Given trend strong trend and the fact it has had time to consolidate just below the high means this could be of interest to momentum traders on the daily and intraday timeframes. 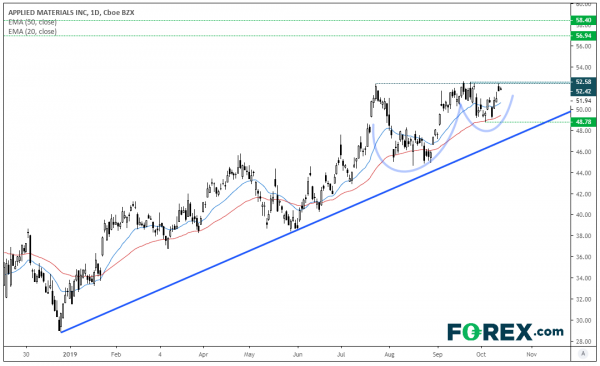 Applied Materials CFD/DFT: The bullish trend is less established than Welltower’s, yet a cup and handle continuation pattern has caught our eye. Prices have found resistance just below 52.60 and the two recent higher lows are what form the cup and handle components. Moreover, the 50-day eMA acted as support ahead of the latest leg higher. Of course, it’s possible resistance could hold for a while long, in which case look for the pattern to morph into a continuation pattern such as an ascending triangle. But ultimately, we’re looking for a breakout above resistance. 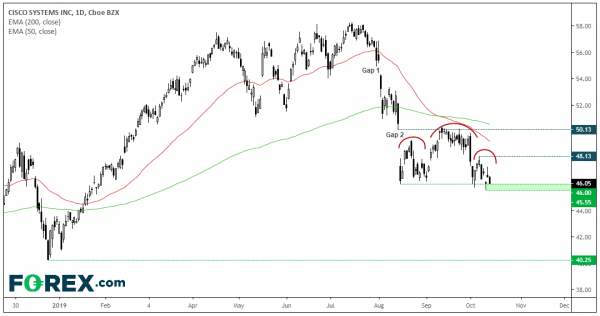 Cisco Systems CFD/DFT: It’s far from perfect as we’re unable to draw an ideal neckline, yet the formation screams head and shoulders top. As the trend is clearly bearish, the H&S is now a continuation pattern which could target the 41-42 area if successful.

The fact we’ve seen two notable gaps lower since the post-Nasdaq bubble highs suggests the downtrend could still be within its infancy. And we especially like how the ‘head’ has closed the gap before turning lower, with the 200 and 50-day eMA’s capping as resistance and providing a death cross (a dramatic name for the faster average closing beneath the longer one).

Apple Inc CFD/DFT: After breaking out of its small correction line, prices reversed yet found support at the lower channel before accelerating high. Going on to close to fresh record highs on Friday, a small bearish hammer has formed to warn of near-term exhaustion. Still, as the trend remains bullish we’ll continue to seek opportunities to buy dips after prices have had a chance to consolidate or correct.

Netflix CFD/DFT: Prices have rebounded a little further than we’d hoped and now closed above the 275.80-282.66 resistance zone. However, the trend structure remains bearish and yesterday’s bearish hammer remains below the 50-day eMA. With earnings due for release tomorrow, we’re keen to see if it can roll over once more in line with the bearish bias or threaten the trend with a break above 305.