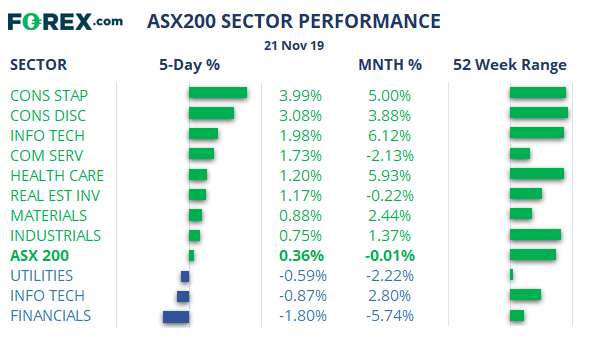 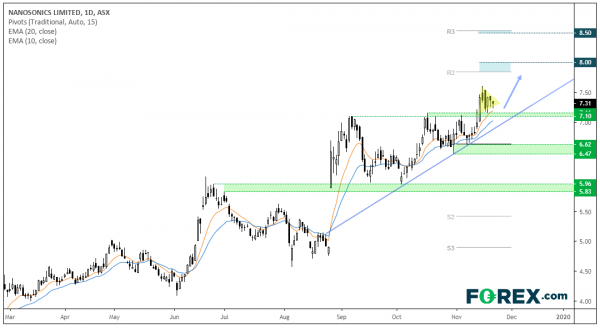 Nanosonic CFD/DFT (NAN): This healthcare stock remains in tip top shape and trade just beneath its record highs. Since the prior analysis, the Doji marked a higher low ahead of its run towards (and break to) record highs.

Price action is now coiling above key support and holding above the 10-day eMA, to show momentum remains strong overall. 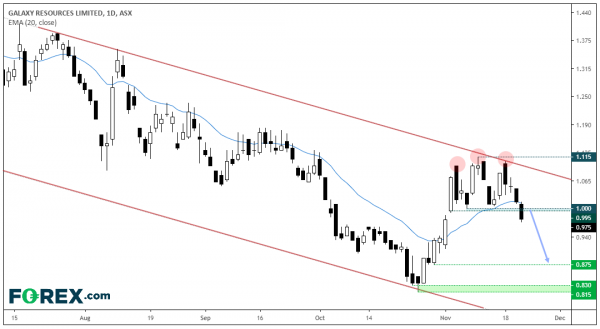 Galaxy Resources CFD/DFT (GXY): We first flagged this stock on the 8th of October for its short potential. As it was trading near its lows after a bearish breakdown, we wanted it to retrace towards the resistance zone before heading lower. Since it traded above the invalidation point, it made its way to the backburner.

Since then, prices have respected a bearish trendline and produced a pattern reminiscent to a triple top. Moreover, today’s price action has broken beneath key support and today’s high was capped by the 20-day eMA. 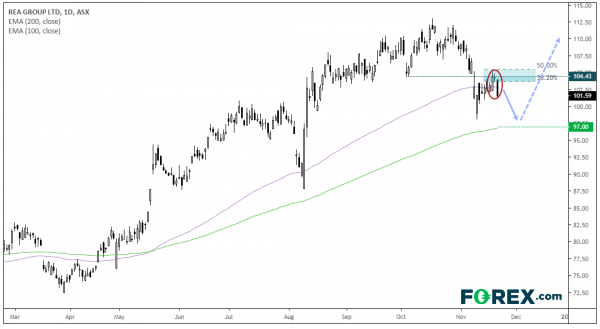 REA Group Ltd CFD/DFT: A simple counter-trend swing trade could be taking shape. Whilst technically within an uptrend, its retracements can be deep and we’ve now seen a pullback into a cluster of resistance, comprising of a swing low and Fibonacci levels. Yesterday’s small Doji followed by an elongated bearish candle today has formed an evening star reversal pattern at the said resistance zone. 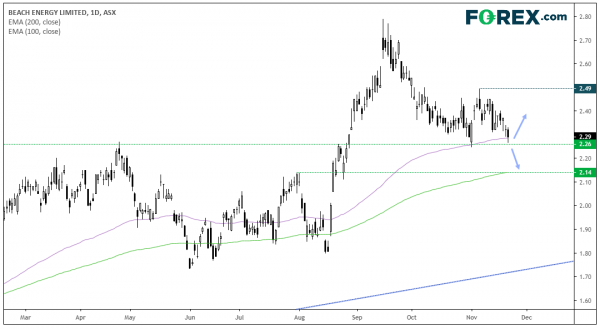 Beach Energy CFD/DFT: We’re keeping a close eye on how prices respond around 2.26. Whilst its within a longer-term uptrend (even if the major swings are far and wide) over the near-term, a break below 2.26 could see prices target the 200-day eMA around 2.14. Yet if prices rebound from support, it could try to revert to its longer-term bullish trend.

Graincorp CFD/DFT: We highlighted the importance of an 8-year support level the stock had failed to break multiple times, and its potential to bounce higher. Since the prior analysis prices have rallied over 14% and, if prior rebounds are anything to go by, could reach the 2035% bracket. Of course, the main issue from here is finding a low volatility entry but take note that current price action shows a bullish engulfing candle following a spinning to (so perhaps preparing for its next leg higher). But, if nothing else, this rebound demonstrates the potential for explosive moves around historical support and resistance levels.