Lest anyone think that the Bank of Canada may be easing given comments from BOC’s Wilkins earlier this week, BOC Governor Poloz made it very clear earlier today that he feels the Bank has monetary conditions “about right”. He also said he feels that global conditions have eased a lot. These comments were looked at as hawkish by the markets. Wilken’s comments on Tuesday were taken by the market as dovish, given that she mentioned the BOC has room to maneuver and has other “tools” the Bank can use, such as forward guidance. Wilkins is considered a front runner to take the Head position when Poloz’s term ends in mid-2020. 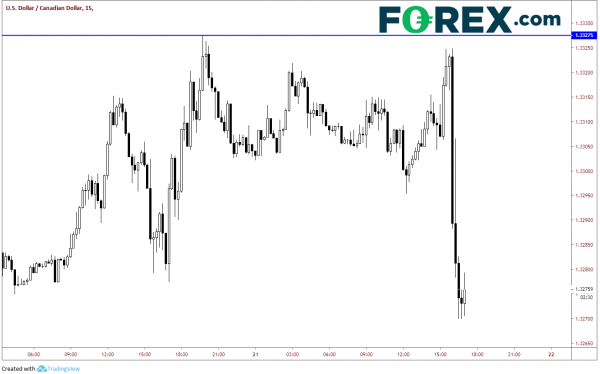 However, as I have been writing about ad nauseam, USD/CAD has been confined to the apex of the symmetrical triangle dating back to early 2016 between 1.3150 and 1.3400.

The second item, and the more likely event to move USD/CAD, is the ratification of the United State – Mexico- Canada- Agreement (USMCA). Speaker of the US House of Representatives Nancy Pelosi has indicated that she is hopeful the Democrats and the Republicans can get issues resolved as early as TODAY! The sticking point is that Democrats want stronger enforcement mechanisms in the pact. The passage of the USMCA would be good news for both the Canadian Dollar and the Mexican Peso, and both may go bid.

If the USMCA gets passed sometime soon and the Bank of Canada is hawkish moving forward, then these may help act as a catalyst to push USD/CAD out of the apex of the long-term symmetrical triangle!