Christine Lagarde gave her first proper speech as European Central Bank Governor on Friday morning. Despite three weeks in the job at the helm of the ECB she was yet to air her views on monetary policy and the eurozone economy which has been weakening over recent months.

The change of a central bank president is a key event. The effectiveness of each president and the stamp which they will want to place on the central bank and its policies can have a strong impact on the value of a currency across the course of their tenure.

1. Christine Lagarde prompted thrifty eurozone politicians to turn on the spending taps. Her call for increased fiscal stimulus to support the ECB’s action has started early. Lagarde will continue to push for fiscal policy to step up. With a strong political background, she may have more success here than Draghi. This could be beneficial for the euro.

2. Christine Lagarde has called for a strategic review of monetary policy in the near future. This could include changing the inflation target which is currently set close to 2%.

3. There is a need to develop the eurozone digital economy.

4. The eurozone is lagging behind the US in innovation.

5. Shared institutions must be developed to promote growth

Christine Lagarde is taking office amid some distinct challenges. Firstly, weakening trade, secondly a long-term trend of slowing growth in advanced eurozone economies and thirdly a divided governing council where around third are against additional easing.
Whilst Christine Lagarde remained tight lipped on monetary aspects, she did not shy away from the fact that she wants eurozone governments to do more “monetary policy could achieve its goal faster and with fewer side effects if other policies supporting growth were alongside it”. Her comments are particularly relevant following the ECB Financial stability report earlier in the week, which identified years of ECB stimulus as a threat to financial stability.

It was difficult to gauge the euro’s reaction to Christine Lagarde’s comments as PMI data was released throughout the speech. PMI figures were a mixed bag from France and Germany saw the euro briefly pick up before the gains faded. A standout concern among the data was the slowing of growth in the German service sector, with lack of employment growth becoming a concern. Could slowing German service sector figures & a persuasive Lagarde help convince thrifty Germany to turn on the spending taps? The euro for now is heading lower. 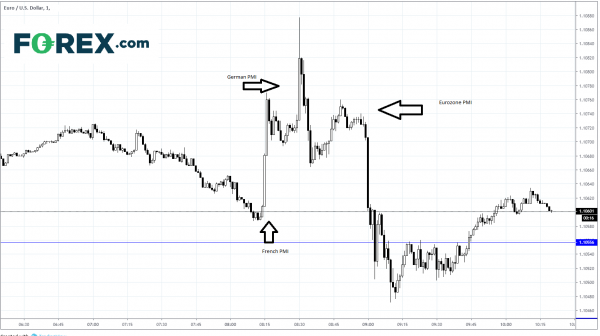