FOMC Recap: Statement Little Changed But Q&A Had Some Excitement

As we noted in yesterday’s Fed Preview, there wasn’t much changed from the November statement, other than to say that the Fed was leaving rates unchanged this month at 1.50% to 1.75%. Last month was the final cut in the mid cycle adjustment, and as promised, Fed Chairman Powell and the Committee left rates on hold. However, this time the decision was unanimous. In addition, the Fed sees no change in rates through 2020 according the Fed’s dot plot forecast. As of the time of this writing, according to the CME FedWatch Tool, the market is pricing in a 93% chance of the Fed leaving rates unchanged at the January 29th meeting.

But there were some fireworks in the press conference Q&A afterwards. When asked about year-end funding in the repo markets, Jerome Powell said that the Fed was open to purchasing coupons, not just Treasury bills. As a result, the US Dollar began falling, and bonds and stocks went bid. The reason for these moves is that, as the market has been suspecting, this is more “Not QE”. (Remember “Not QE” is a term Powell used as the Fed was providing liquidity to overnight repo markets, which is essentially QE) 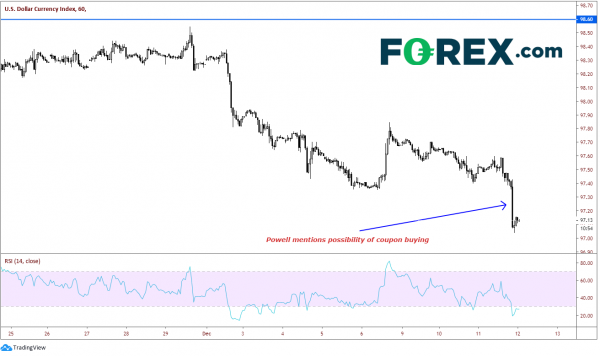 Although there was little fanfare in the FOMC statement itself, the Q&A was much more interesting. It will be important to watch over the next few weeks how the Fed responds to the possibility of a liquidity crunch into the end of the year. The main question will be: Does the Fed have to provide more “Not QE” into year end?