The European Central Bank released its interest rate decision today and left key interest rates unchanged at 0%, as well as, maintaining -0.5% on the deposit facility rate. In the accompanying statement, the Bank announced the start of the “ECB Strategic Review of Monetary Policy”. Although not giving many specifics, Christine Lagarde later mentioned it will take most of this year to complete. In addition, the statement said that the Committee “sees rates at present or lower levels until the inflation outlook robustly converges to target.”

On the bright side, in the press conference which followed, Lagarde said “underlying inflation, while low, has stabilized, or upticked slightly” while adding that “over the medium-term, inflation is expected to increase.” She also mentioned that “governments with fiscal space should be prepared to react in a timely manner”. 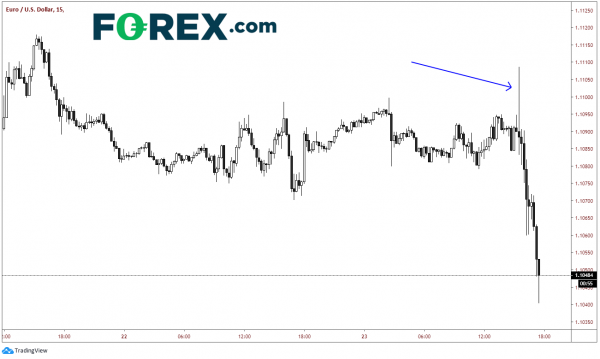 The pair has been in a long-term falling wedge since mid-2018 and appeared to be breaking higher near the end of December 2019. However, the EUR/USD hit the 61.8% Fibonacci retracement level from the June 25, 2019 highs to the October 1st lows near 1.1210, the pair reversed. 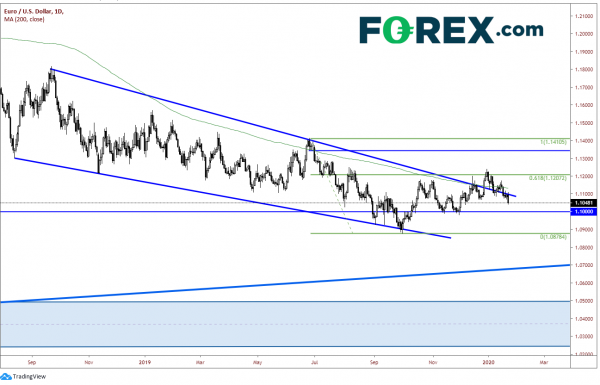 EUR/USD formed a Head and Shoulders formation on the 240-minute timeframe and broke the neckline as it traded back into the falling wedge(on the daily). The target for a head and shoulders pattern is the distance from the head to the neckline added to the breakdown of the neckline area. In addition, which in this case is near 1.0935. On this move lower, price also broke through the 50% retracement level from the lows of October 1st, 2019 to the highs on December 31st. Horizontal support and the 61.8% Fibonacci retracement level of the previously mentioned timeframe could stall the move lower between 1.1015 and 1.1030. 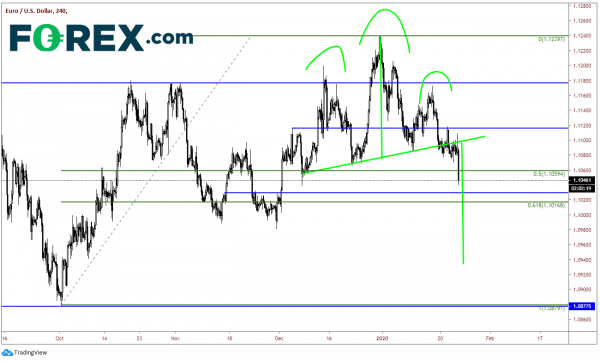 Note that EUR/USD isn’t the only Euro pair moving lower today. EUR/JPY is testing the bottom trendline of a rising wedge on the daily timeframe, down over 100 pips on the day so far near 120.80. 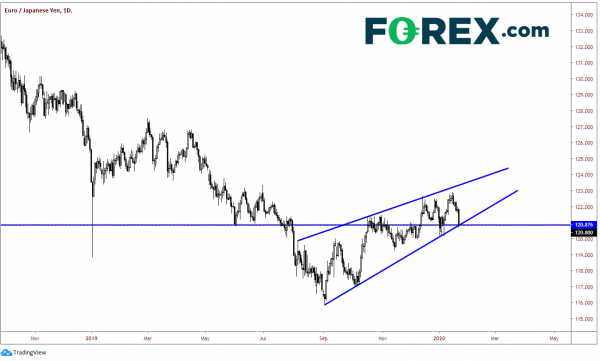 The move lower in Euro pairs today may be attributed to lack of information from the ECB. However, it may also due to risk off across the board today as most Yen pairs are lower (after USD/JPY ran downside stops near 109.70 early in Asia) and continues nervousness from the markets regarding the coronavirus. However regardless of the reason, it is important to note the price action (specifically in EUR/USD), and note targets, as well as, important levels on the way to target.