The sell-off in risk assets continued in early European session. A jump in new coronavirus cases in Italy and South Korea over the weekend has intensified concerns that global demand could be a lot softer in Q1 than anticipated due to the impact of the virus.

Investors went in panic mode and dumped stocks with Airline shares taking the brunt of the sell-off in early trade, with Easyjet slumping 11%, IAG failing 8% and Ryanair down some 9% or so. Consequently there were massive falls for stock indices, with Italy’s FTSE MIB down 4%, while emerging market currencies slumped along with crude and copper prices as demand concerns intensified. The rush to safety saw further sharp gains for gold and digital currencies. The VIX jumped. Unless we now see a quick snap-back, Wall Street looks set to open with heavy losses with index futures down aggressively this morning.

About 80,000 people have now been affected by the coronavirus, killing more than 2,600. China is by far the worst-hit, but the outbreak has now spread sharply to South Korea and Italy, where several new cases were reported over the weekend. Investors fear the situation could get a lot worse and the number of people affected could be a lot higher than officially reported. 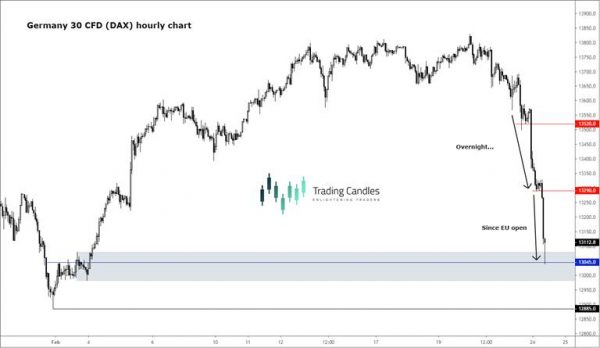 Where do go from here in so far as the markets are concerned?

Well, clearly investors are in a panic mode right now which means there could be great opportunities to pick up shares of companies with good fundamentals on the cheap. But as far as the wider markets are concerned, waiting for the right opportunity is the key now for most investors. For experienced short-term traders, this jump in volatility must be great after what was a very quiet 2019. It is impossible to say when the panic will be over, or when the markets will turn around. It could be later today, this week or sometime in the future. Trying to pre-empt a bottom in risk assets could be very costly, so let the charts guide.