USD/MXN may already be on its way to new highs!

The Central Bank or Mexico (Banxico) cut its benchmark interest rate by 50bps today from 6.5% to 6.0% in a surprise inter-meeting bank cut. This follows a previous emergency inter-meeting rate cut of 50bps on March 20th. In addition, the bank provided an additional 750 billion pesos of stimulus to help support financial conditions throughout the country. This move comes on the heels of collapse of crude prices yesterday in the May Crude Oil WTI contract to below $-40.00 and today’s fall in the June Crude Oil WTI contract of nearly -25%, with a low of $6.45.

Mexico has been hit with a double whammy as both the coronavirus and the fall in oil prices are hurting the oil exporter. The move today was primarily due to the economic fallout of the coronavirus. However, because Mexico is also a large exporting oil country like Canada, they get hit even harder with a whack to oil prices because the largest oil producer in the country, Pemex, is state owned.

As we wrote about yesterday when discussing emerging markets, USD/MXN had gone bid from the low on February 19th to the highs on March 23rd near 25.45. The pair pulled back to the 38.2% retracement level of that time period and has been trading sideways in a pennant formation since. Today the pair traded higher and appears ready to break out of the pennant formation and begin its move towards the pennant target at roughly 30.75! 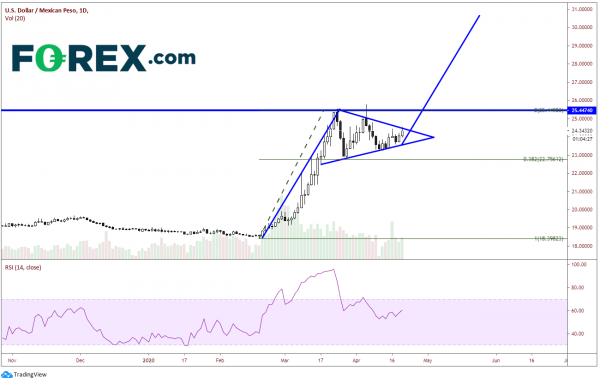 On a 240-minute timeframe, if we move the downward sloping trendline to the most recent highs of 25.81, it appears price is at key resistance as it tas already broken higher out of the triangle to horizontal resistance and the 30% retracement of the move from the April 6th highs to the April 10th lows, near 24.50. If price continues higher, the next resistance level is the 61.8% retracement from the same time period at 24.85. Final resistance is the all-time highs near 25.81. First support is near the apex of the triangle near 23.86. Below that support is at the April 10th lows at 23.27. The next horizontal support is at 22.83 (which is also the 38.2% Fibonacci retracement level on the daily timeframe). 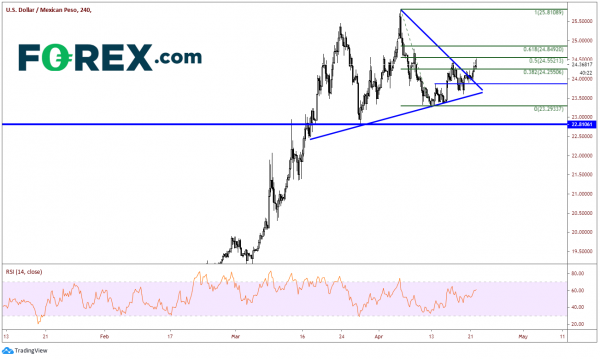 As Mexico tries to suppress the economic impact of the coronavirus and the collapse in oil prices, the charts are already pointing to higher prices for USD/MXN. The currency pair may already be on its way to new highs!