The USD/JPY holds up well after the Japanese government released worse-than-expected economic data.

Japan’s industrial production dropped 8.4% on month in May (-5.7% expected), mainly dragged by automakers cutting back production. This followed a 9.8% contraction in April. Global demand remained weak in May thanks to coronavirus-induced lockdown of various major economies, causing severe impact to Japan’s export-reliant manufacturing sector.

Meanwhile, the situation seemed to improve a bit in May (-8.4% vs -9.8% in April), and investors should watch closely to see if the improvement continues amid reopening of economies in the U.S. and around the world.

On an Intraday 30-minute Chart, USD/JPY remains on the upside after rebounding from a low of 107.04 seen yesterday. 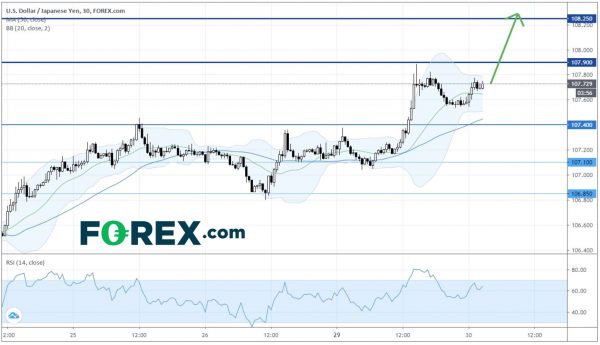 Currently USD/JPY stays at levels above both 20-period and 50-period moving averages.

And it is striking against the Upper Bollinger Band.

Overhead Resistance at expected at 107.90 (around the high of yesterday).

Bullish investors should regard the level of 107.40 (a previous price resistance) as the Key Support (Stop-loss Level).