As widely expected, the Reserve Bank of Australia kept its key interest rate unchanged at an all-time low of 0.25%.

The central bank also reiterated its intention to buy more bonds to cap the yield on three-year government bonds at 0.25%.

RBA Governor Philip Lowe said in a post-meeting statement: “As difficult as this is, the downturn is not as severe as earlier expected and a recovery is now underway in most of Australia.”

Meanwhile, the AUD/USD is emerging to the upside after undergoing a sharp consolidation initiated at an intraday high above 0.7220 last Friday.

On an Intraday 1-Hour Chart, AUD/USD has crossed above the upper boundary of a Bearish Channel. 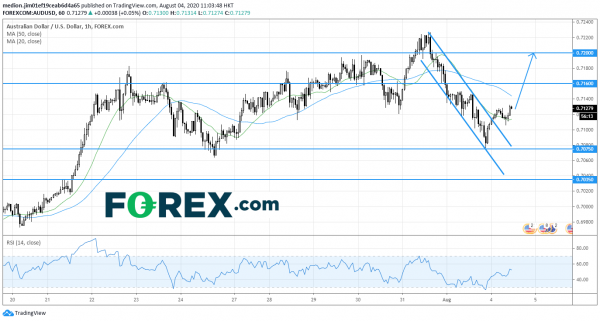 It has returned to levels above the 20-period moving average, and is on its way toward the 50-period one on the upside.

A further rebound should make AUD/USD encounter resistance at 0.7160 (above the 50-period moving average) and at the key level of 0.7200.

Bullish investors should take the level of 0.7075 (around a previous low) as the Key Support.