Traders already swimming in a sea of Federal Reserve acronyms from QE (quantitative easing) to ZIRP (zero interest rate policy) to TALF (Troubled Asset Lending Program) added another one to their lexicons last month: AIT (average inflation targeting). While it sounds benign enough, the Fed’s adoption of AIT is arguably the most important new policy since the introduction of Quantitative Easing more than a decade ago.

Much as the name suggests, AIT means that the Fed will now strive to see the US economy average 2.0% inflation over longer periods of time, rather than targeting a precise 2.0% inflation rate at all times. Effectively, this means that the central bank is willing to allow inflation to run above 2% in the near-term to raise the longer-term average rate of price increases after a decade running below the 2% the target.

In the words of the Fed’s most recent monetary policy statement, “with inflation running persistently below this longer-run goal, the Committee will aim to achieve inflation moderately above 2 percent for some time so that inflation averages 2 percent over time and longer-term inflation expectations remain well anchored at 2 percent.” The statement went on to note that the Fed expects short-term interest rates to remain at effectively 0% “until labor market conditions have reached levels consistent with the Committee’s assessments of maximum employment and inflation has risen to 2 percent and is on track to moderately exceed 2 percent for some time.” In other words, Jerome Powell and company are planning to keep the keep the proverbial pedal to the metal when it comes to monetary stimulus, likely for the next several years.

Based on the Fed’s latest forecasts, that decision makes sense. After all, the central bank revised down its forecast for GDP growth in 2020, 2021, 2022, and 2023 in its most recent economic forecasts while simultaneously raising its estimates its estimates for inflation in each of those years:

If you’ve made it this far, you’re probably wondering: What does all this monetary policy mumbo-jumbo mean for the US dollar? The classic interpretation is that a long period of low interest rates (not to mention ongoing asset purchases) is a negative factor for the currency in the question, and that’s certainly a relevant consideration in this case. However, no policy or trading decision is made in a vacuum, and the Fed’s “early” (compared to major developed country rivals) commitment to essentially raise its inflation target could put the US on the path to an earlier economic recovery from COVID-19, much like the US central bank’s early decision to embark on multiple Quantitative Easing programs allowed the US economy to recover more quickly from the Great Financial Crisis.

Whereas inflation in the US has already nearly recovered to pre-pandemic levels, the Eurozone has seen its “inflation” figures hover around zero for the past five months, so it wouldn’t be surprising to see a similarly aggressive monetary response across the Atlantic in the months to come. Turning our attention to the chart of EUR/USD, the world’s most widely-traded currency pair has been in rally mode since mid-March, tacking on more than 1,400 pips from peak to trough over that period. Over the last six weeks though, EUR/USD’s upward momentum has stalled in the 1.1700-1.1950 zone. At the same time, the RSI indicator has been trending lower, signaling fading buying pressure. 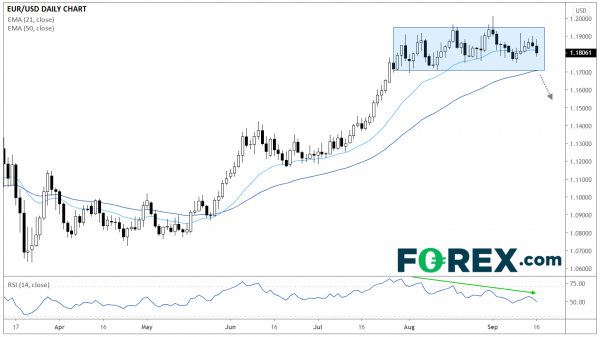 Even today’s ostensibly bearish US (bullish EUR/USD) news from the Fed has failed to jolt the pair to life. This sets up a potential opportunity to sell EUR/USD if it breaks below support at 1.1700, especially if we start to hear about the European Central Bank expanding its stimulus in the coming days and weeks. While this would represent a trade against the recent trend, the fading RSI indicator and lackluster reaction to the Fed’s most recent meeting suggests that EUR/USD may be vulnerable to a pullback from here. Only a daily close back above 1.1950 would signal that recent uptrend has resumed for a potential move toward 1.21 or 1.22 next.