#UK – IRELAND#
Next, a retail group, released 1H results: “Brand full price sales in the first half of this year were down -33% on last year and total sales (including markdown sales) were down -34%. Profit before tax in the first half of the year was £9m (on a pre-IFRS 16 basis) and we reduced our net debt by £347m to £765m. Full price sales at the beginning of the second half have continued to exceed our expectations and we have revised our central scenario for full year profit, up from £195m to £300m.”
From a chartist point of view, the stock is testing the horizontal resistance of March 2020at 6280p. Moreover, the Relative Strength Index (RSI, 14) is bouncing. Above 5600p (overlap area around 5676p), look for 6672p and the previous top of December 2019 at 7360p in extension. 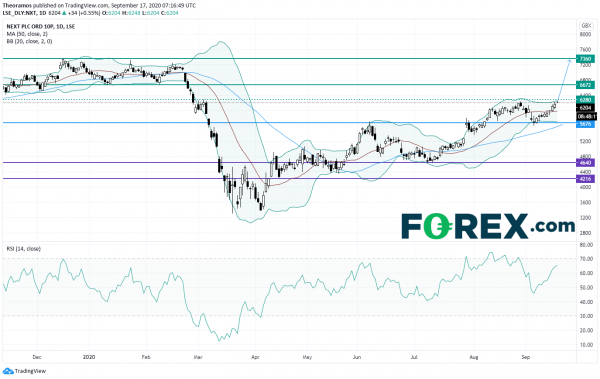 Playtech, a gambling software development company, reported that 1H adjusted EPS from continuing operations declined 37% on year to 0.144 euro and adjusted EBITDA dropped 16% to 162 million euros on revenue of 564 million euros, down 23% (-22% at constant currency).

Informa, a business intelligence company, was downgraded to “neutral” from “overweight” at JPMorgan.

Segro, a property group, was upgraded to “buy” from “hold” at HSBC.

Compass Group, a contract foodservice company, was upgraded to “overweight” from “equalweight” at Barclays.

#GERMANY#
HeidelbergCement, a building materials company, was upgraded to “equalweight” from “underweight” at Barclays.

RWE, an electric utilities company, was downgraded to “hold” from “buy” at Societe Generale.

#FRANCE#
Euronext, a stock exchange operator, was downgraded to “hold” from “buy” at HSBC.

#SPAIN#
CaixaBank and Bankia, the two Spanish banks, were upgraded to “buy” from “hold” at HSBC.

#BENELUX#
Unibail-Rodamco-Westfield, a commercial real estate company, announced a 9 billion euros deleveraging plan to strengthen its balance sheet, including a fully underwritten 3.5 billion euros capital raise to be used to immediately reduce leverage, 1.0 billion euros cash savings over the next two years by limiting cash dividends, a further 0.8 billion reduction in operating capex and 4.0 billion euros of disposals expected to be completed by year-end 2021.

Eurozone PMIs: Putting A Double-Dip Recession On The Map?