#UK – IRELAND#
William Hill, a bookmaker, and American resorts operator Caesars Entertainment confirmed that they are in advanced discussions concerning a possible 272p per share cash offer for William Hill, adding that “Caesars has finalised its due diligence and a further announcement will be made as and when appropriate”.

GlaxoSmithKline, a pharmaceutical company, reported that the U.S. Food and Drug Administration has approved its Nucala “as the first and only biologic treatment for Hypereosinophilic Syndrome”.

Aviva, an insurance group, was upgraded to “buy” from “hold” at Deutsche Bank.

Daimler, an automobile group, may pick Joe Kaeser, currently a board member, to succeed chairman Manfred Bischoff next year, according to Bloomberg.

#FRANCE#
Air France-KLM’s, an airline group, French arm Air France said it will operate 50% of its flight schedule planned for November and December 2020, due to the current applicable travel restrictions.

Veolia, a resource management company, confirmed that it will submit its improved offer for Engie’s stake in Suez by September 30.

#BENELUX#
ArcelorMittal, a steel producer, announced that it has agreed to sell its ArcelorMittal USA to Cleveland-Cliffs for an aggregate equity value consideration of 1.4 billion dollars, with upfront cash of 505 million dollars and the remainder in the form of equity.
From a weekly point of view, the share is capped by a declining trend line drawn since May 2018. Moreover, the 52 exponential moving average plays a resistance role, while the RSI has struck against the resistance level at 56.6%. Below the overlap area at 11.7E look for the horizontal support of May at 7.9E and 6E in extension. 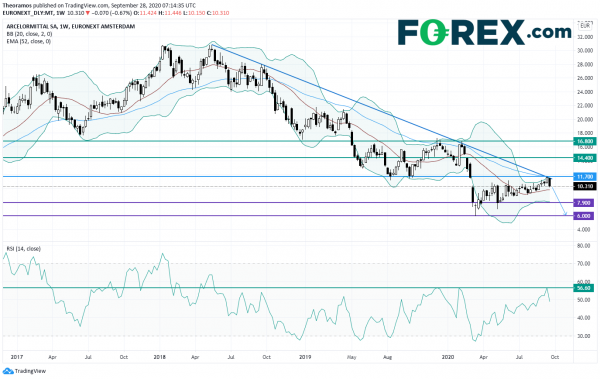 Galapagos and Gilead Sciences, the two pharmaceutical groups, announced that the European Commission has granted marketing authorization for Jyseleca (filgotinib) for the treatment of adults with moderate to severe active rheumathoid arthritis.

#DENMARK#
Chr Hansen, a bioscience company, announced that it has agreed to sell its Natural Colors Division to investment firm EQT for 800 million euros.

China Remains On The Road To Recovery