Bank of England: Cautiously Optimistic With Negative Rates Still On The Table

Thursday at 12:00 noon followed by Andrew Bailey’s press conference at 12:30

The Bank of England is not expected to move on policy when it makes its monetary policy announcement and updates the bank’s quarterly forecasts.
The BoE raised its QE purchases in November to £875 billion, up from £725 billion. The health of the UK economy has deteriorated further since the last meeting as the UK entered into its third national lockdown.

Not quite ruling out negative rates

Whilst the central bank has refused to rule out cutting interest rates BoE Governor Andrew Bailey has put more distance between himself and a move into negative rates in recent comments. Meanwhile, other members on the monetary policy committee remain enthusiastic about the strategy.

In this meeting the BoE will publish the results to its consultation on negative interest rates. The central bank is broadly expected to embrace negative rates as a tool but to stop well short of using them. Expectations are for interest rates to remain at or above 0.1% the current rate through to mid 2023

That said, with Brexit behind us and the vaccine rollout gathering pace a solid economic rebound could be on the horizon in Q2 and H2. There is a good chance the central bank will focus on the more upbeat outlook over the near-term economic hit from lockdown. With this in mind it appears unlikely that the BoE will act.

Following another retest of the multi year top for GBP/USD of 1.3750 the price has rebounded lower. It has fallen below its 50 sma on the 4 hour chart and is currently being contained by the 100 sma at 1.3665.

The pair remains within the familiar 150 pip range for a second straight week after repeated failures to convincingly break above 1.37 resistance zone suggestion weakness in the price at this level.

The 4 hour chart is starting to paint a bearish picture, supported by a depressed RSI. However, the weekly chart supports a bullish set up and the monthly chart fading bullish momentum amid overbought conditions. With a mixed picture GBP/USD could remain directionless for now. 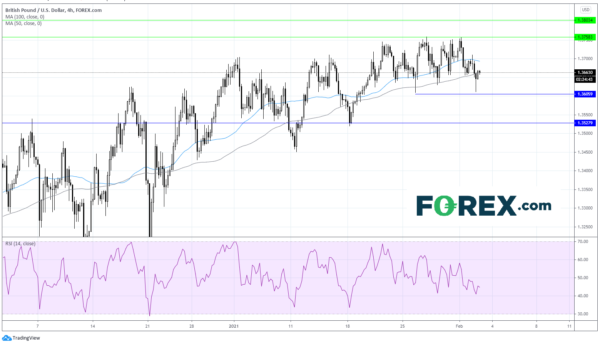