US indices provided a technical pattern at record highs, which can be indicative of a reversal. And bearish momentum on USD is coming into question. 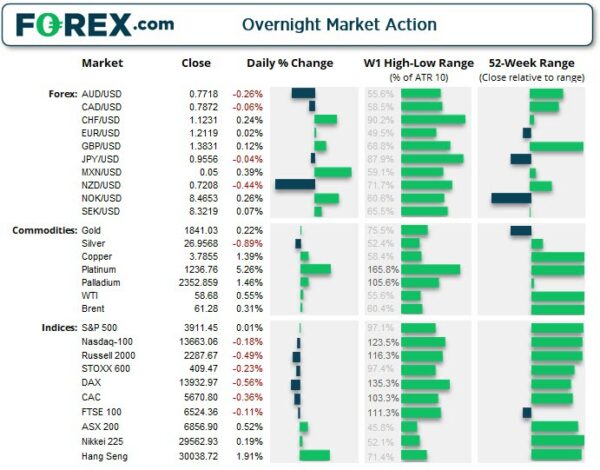 Are dollar bears losing their appetite?

The US dollar index (DXY) finished slightly lower overnight, although it certainly wasn’t a one-way bet against the greenback. Bearish momentum for DXY is waning despite trading through a less-than

impressive (and highly anticipated) inflation release. Perhaps the lack of bearish follow through could be indicative of a bounce higher, as it may not take much good news to shake out bears at least temporarily. Other signs of momentum loss on the daily charts include:

That said, if we were to consider shorting the dollar it would be on USD/CHF. The Swiss franc was broadly higher overnight and USD/CHF remains under pressure on the daily chart. Even if the dollar recovers we estimated the retracement would be smaller on USD/CHF than against other pairs, which makes it a potential candidate to ‘fade into rallies’. 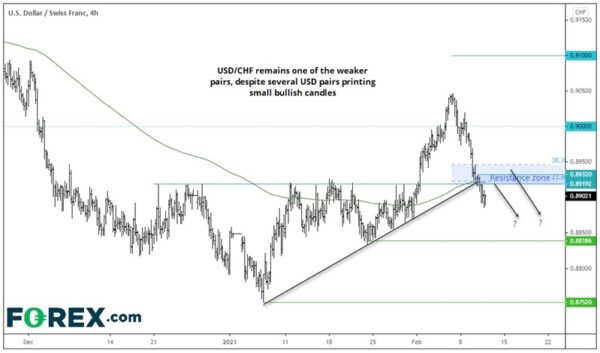 Key reversals form on US indices

US equity markets wobbled at their record highs, with the Nasdaq-100, S&P 500 and Russell 2000 all forming key reversal candles (which are particularly volatile candles, usually on high volume and can be indicative of a reversal). However, what lacks here is the high volume component. Bearish key reversals also formed at the end of January which did mark the beginning of a minor correction, so we are certainly on guard for this potential over the next few sessions. And, if the inverse correlation with USD hold true, lower equities could support the dollar at these lows.

Equities across Europe also traded slightly lower overnight. Although given their reluctance to break to new cycle highs on Friday and instead produce small doji’s below resistance, further downside appeared the more likely move anyway. Most notably, the DAX and CAC produced bearish engulfing days and ASX 200 remains beneath key resistance. Bucking the trend is the Hang Seng and Nikkei 225 which remain within firm bullish trends, but keep in mind Hang Seng trading will be limited over the Chinese Lunar New Year (and closed on Monday).

As warned in yesterday’s report, copper futures broke through key resistance to hit their highest level since October 2012. Not wanting to miss out on the action, platinum also broke to a 6-year high. Yet gold and silver continue to trade within congested areas. Gold etched up a fourth consecutive bullish session and closed with a second consecutive bearish hammer on the daily chart, finding resistance at the 50-day eMA. Silver also remains a shadow of its former self, trading in a relatively tight range but holding above it 10-day eMA. Its next directional move also appears to be a flip of a coin.

Oil futures pushed higher yet again to 58.67, with WTI futures producing a small doji on the daily chart and finding resistance almost perfectly at the 200-month eMA. The longer it remains at this level on low volatility, the greater the odds of bulls a correction may be. Brent futures continue to trade at a premium at 61.46, although its 200-month eMA leaves a little more wriggle room for bulls at 62.90.

Inflation data for the US underwhelmed overnight, with core CPI flat at 0.00% m/m compared with 0.2% expected and broad CPI (which includes energy and food) hitting forecasts of 0.3%. Whilst these numbers disappoint anyone looking for the Fed to act sooner, we suspect the basing effect may inflate apparent annualised CPI figures in the months ahead. And it may catch some by surprise.

Seeing as some components of inflation fell over 30% during the pandemic, it will only require a relatively small rise to send the annualised rates higher which is probably why the Fed are happy to wait for inflation to overshoot before acting. Besides, the Fed want unemployment to fall significantly before they raise rates anyway, although inflationary pressures (even if due to basing effect) may force them to use the ‘t’ word sooner; taper. 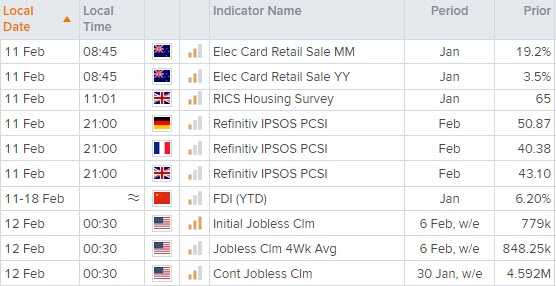