Wall street was lower overnight as rising bonds yields continued to spook equity investors yet act as a tailwind for commodities and related forex markets. 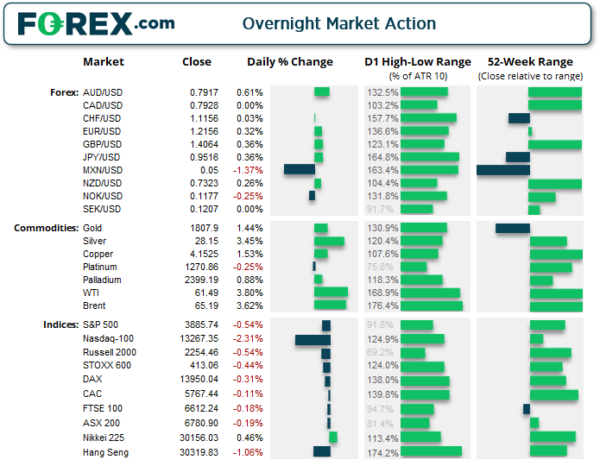 Wall street was lower overnight as rising bonds yields continued to spook equity investors yet act as a tailwind for commodities and related forex markets (namely AUD and NZD). So from the perspective of Wall Street, recent price could be described as risk-off, with a twist.

Treasury markets continued to rip higher with the US 30-year yield hitting its highest level in 13-months, but perhaps technical resistance could soon come to the rescue. Currently trading at 2.17%, the 30-year yield is fast approaching its 200-week eMA at 2.27% and 50-month eMA at 2.28%. The 10-year currently trades at 1.37% at a 52-week high with its next major resistance level sitting at the September 2019 lows of 1.43%. Still, whilst such technical levels may provide a road-bump they are unlikely to turn the underlying macro trend of higher yields and a weaker dollar.

The Nasdaq 100 led Wall Street lower overnight, after breaking convincingly beneath its 10 and 20-day eMA’s and falling to a 3-day low. The S&P remains relatively supported by its 20-day eMA but didn’t escape downside pressures. Meanwhile the Russell 2000 index remain relatively unscathed above its 10-day eMA and traded within a tight range at the upper end of Friday’s candle. Should US indices rebound then the Russell 2000 looks like it could remain to be the stronger performer.

The ASX 200 is set to open flat but price action is sitting precariously above Friday’s lows (6780.90). A break below 6756 opens up the trap door for further losses, but if bulls can hold above 6780.90 then there is a slight chance of a mild rebound.

Will this copper craze ever end?

Copper has continued to push higher but we may have seen its first clue of weakness overnight. Just yesterday we noted that, whilst copper’s exponential rise may not be one for bears to short just yet, it does have the hallmarks of a blow-off top. It’s then interesting to note that yesterday’s daily candle produced a potential ‘selling tale’ (high upper wick) before momentum turned and prices settled beneath 50% of the day’s range. Still, whether one wants to short this rocket remains debatable, but every turning point must start with a smaller clue and we take yesterday’s candle to one.

Currently trading around 4.13, copper appears overextended from its 10-day eMA (which is -6% lower at 3.87). And if copper falls, it may take a little wind out of AUD’s bullish sales although rising yields also need to be considered in that case.

Gold and silver popper higher overnight after a skirmish at recent lows. Following a bullish outside candle at key support we’d noted gold’s potential to mean revert yesterday. And it did not disappoint. Now at a 4-day high and back above 1800 and 10-day eMA, 1820 is the next likely target for bulls around the 200-day eMA. Silver looks more constructively bullish at its 3-week high, having produced a wide bodied Doji at the 50-day eMA and bursting back above its 10 and 20-day eMA. Bulls could consider entering long dips above yesterday’s high (27.60).

The dollar teases with a break below 90.00

Stronger-than expected IFO data from Germany pushed the dollar lower overnight as the divergence between the US and European economies appeared less than originally feared. The US dollar was broadly lower which saw the US dollar index (DXY) tease bears with a break below 90.00. Whilst support was found at this key level, we note a potential head and top reversal pattern is forming with three consecutive down days heading into support. Basically, be on guard for a downside break.

This allowed the Australian dollar to poke its head above its 200-month eMA but we’d prefer a more convincing attempt before confirming it a breakout of such a key level. Still, it was the strongest major and with good reason as copper and yields continue to egg the Aussie higher.

GBP/USD chalked up its second consecutive session above 1.4000 as Boris Johnson officially unveiled his roadmap out of lockdown. GBP/CHF has rallied to a 52-week high is now over half way to our 1.2900 target, although prices have stalled around its 200-week eMA so perhaps a technical correction is due.

A weaker frequently means a stronger EUR/USD (the euro does account for 57% of the dollar index, after all). Do if DXY does break below 90 then it’s game on for a bullish reversal pattern on EUR/USD.

The weekly chart remains above its 20-week eMA and demand clearly resides above 1.2000. And a higher low has formed on the daily chart to produce a ‘higher low’, so we just need a breakout of the H&S neckline to confirm the breakout. 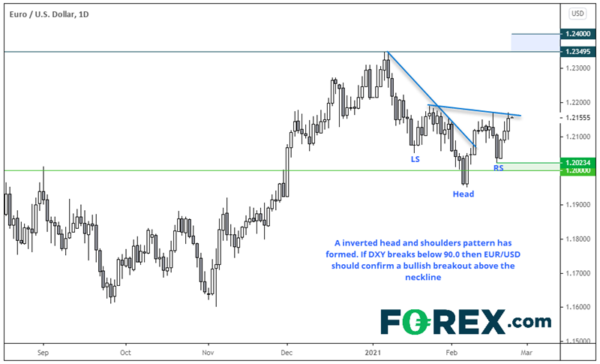 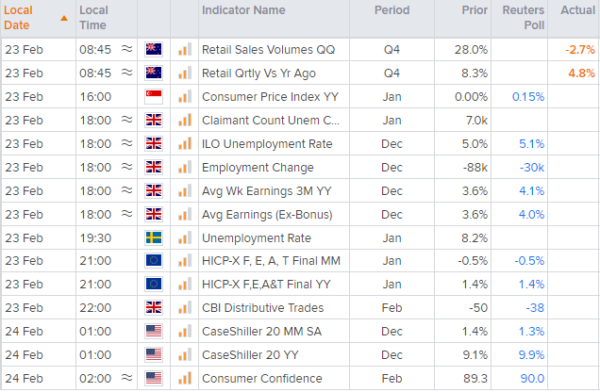