European Open: New Highs For WTI, UK Jobs And Powell Up Next

News flow begins to pick up today, with UK employment data, Powell’s testimony and RBNZ’s first meeting of the year in focus. 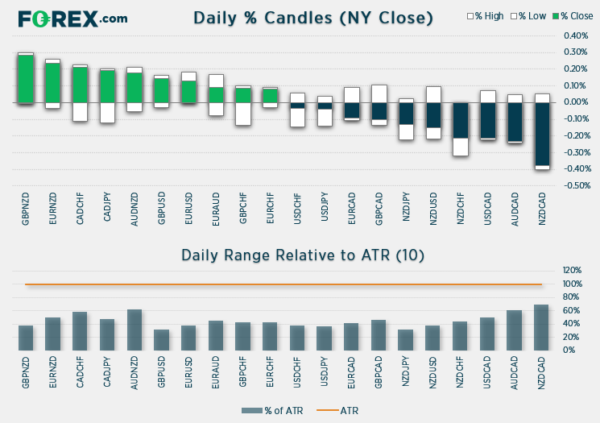 Indices were off to a soft start as equities initially tracked Wall Street lower, although the ASX 200 and Hang Seng index recovered and posted gains later in the session. Whatever troubles were seen in the tech sector overnight were eventually overshadowed by strong performers in the energy sector, as WTI hit its highest level in 13 months.

The ASX 200 produced a bullish engulfing candle after a failed break beneath Friday’s low and now trades back above 6800 to close at 6,839.2. Energy and basic materials led the index higher and the best performers were Westgold Resources (WGX) and Woodside Petroleum (WPL). The Hang Seng reversed earlier losses to close the session +1.3% higher and was, once again, the strongest performer in Asia. The Nikkei 225 was closed due to a bank holiday in Japan.

Any concerns of a correction for oil prices have been swiftly brushed aside as WTI broke to its highest level since January 2020. After just two minor bearish days, WTI printed a bullish engulfing candle yesterday and overnight trade saw it break to new highs. Technically, the theme with WTI has been plain and simple; small pullbacks and large upswings. And until momentum increase to the bears advantage, shorts will likely continue to get their fingers burned. WTI currently trades at 62.65 (+1.57%) and Brent traders at 65.26 (+1.15%).

Forex: Volatility subdued for now, 90 on DXY is key

Volumes were noticeably lower as Japan celebrated Emperor’s Day and their major exchanges were closed. All majors and crosses we track remained well within their ATR’s (average true ranges) ahead of the UK open as they await a fresh catalyst. GBP/NZD and EUR/NZD have been the strongest pairs of the Asian session and NZD/CAD and AUD/CAD the weakest.

EUR/USD continues to tease with a breakout of an inverted head and shoulders (bullish reversal) pattern on the daily chart, although futures markets show bears continuing to sell into resistance around 1.2170.

GBP/USD remains defiantly bullish, although traders appear hesitant to break above yesterday’s high and challenge the 1.4100 handle ahead of UK employment data at 0:700 GMT. Whilst the pound remains supported due to the UK’s rapid vaccine rollout and Boris Johnson’s plan to taper lockdown, recent strength appears to be more related to US dollar weakness.

On that note, the US dollar index (DXY) is holding above 90 which is likely to be a pivotal level for markets. A break beneath 90 likely confirms the bullish breakout on EUR/USD and should help support GBP and of course commodity prices during their next leg higher. Failure for DXY to hold below 90 could see said markets finally embark on a technical correction.

GBP/CHF: The gift that keeping on giving?

The bullish structure on GBP/CHF continues to impress since breaking out of its multi-month basing pattern on the 4th of February. Having racked up seven consecutive bullish candles on the daily chart (and now aiming for its eight) we may be approaching a time where a correction, however minor, could be in stall. But until we see momentum turn lower then its trend (and therefore our bias) remains up. 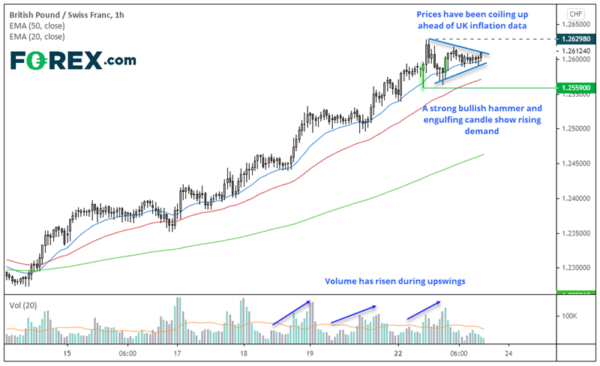 We can see the strong bullish trend on the hourly chart and it is encouraging to see that volume has risen during upswings, then decline during minor retracements. Prices are coiling up within a potential triangle / pennant pattern at the highs, and several bullish candles has formed to show demand above 1.2560. 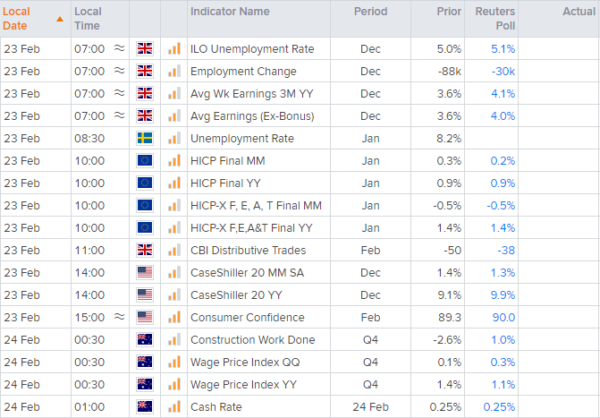 UK employment data kicks of the European session at 07:00. -30k jobs are expected to be shaved off of the headline figure. Which would be a improvement over November’s -88k culling. With GBP pairs remaining firm across the board it could take quite a downside surprise to threaten their trends, so any bearish spikes could be seen as an opportunity to re-join the trend at a more favourable price.

Euro Zone CPI data is out at 10:00 although, due to it being the ‘final reads’, is less likely to be a volatile event unless there is a large revision to the initial report. Still, with EUR/USD teasing its recent highs perhaps it may take a minor revision lower to flush out some weaker longs around resistance.

In the early hours of tomorrow, RBNZ (Reserve Bank of New Zealand) hold their first monetary policy of the year. The consensus is for them to hold rates at a record low of 0.25% as their economy continues rebound faster than expected. Besides, they increased stimulus at their November meeting, tipped their hat to ‘significant’ fiscal stimulus and said they planned to hold them steady for 12 months. But don’t be too surprised to hear them discuss how banks are prepared for negative rates even though RBNZ have all but abandoned that idea.

Jerome Powell is due to deliver his testimony to congress and is expected to stand firm with his view to keep policy easy and praise fiscal stimulus. Whether he’ll touch on inflation is yet to be seen but recent comments from fed members are that they are not concerned by rising inflation (yet, at least).