Action Forex
HomeContributorsFundamental AnalysisECB: What Did We Learn Today?: EUR/USD

ECB: What Did We Learn Today?: EUR/USD

The ECB had their March Interest Rate Decision meeting earlier. Expectations ranged across the board; however, nothing was too significant. The main takeaway from the meeting and the press conference was as expected, not too significant. The ECB said that given the uptick in inflation and inflation expectations recently, Pandemic Emergency Purchase Program (PEPP) purchases over the next quarter will be significantly faster. In addition, PEPP will run at least through the end on March 2022. ( This did not change, though some expected them to increase the duration.) Recall that one of the main benefits of PEPP is that the ECB is not tied to any specific amount they need to purchase at one time. The ECB has 1.85 trillion Euros to spend, at their discretion, to keep yields low. This differs from the FED, which is committed to buying $80 billion of Treasuries and $40 billion of MBS per month. Christine Lagarde said PEPP is not Yield Curve Control. (However, it essentially is. The ECB will buy bonds in the part of the yield curve where yields are rising the most.) Theoretically, buying more bonds should decrease yields, which should bring down the value of the Euro. If the ECB is now buying MORE bonds than they were previously, and the Fed is buying the SAME amount, EUR/USD should move lower. 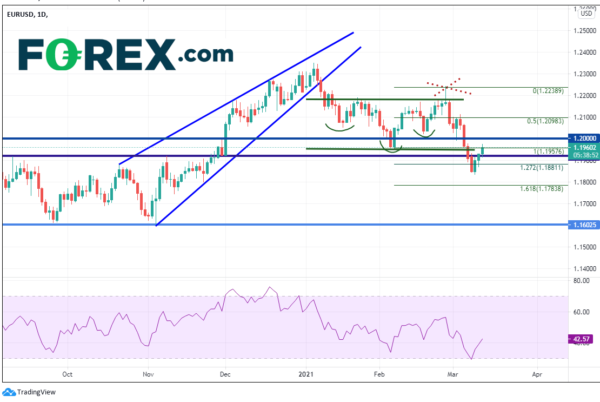 On a 240-minute timeframe, EUR/USD has formed a flag pattern. Notice that the top trendline of the flag pattern confluences with horizontal resistance (from the daily) and the 38.2% Fibonacci retracement from the highs of February 25th to the lows of March 9th near 1.1990. The target for flag pattern is the length of the flagpole added to the breakout point, which is currently near 1.1730. First support is back at the March 9th lows near 1.1838. Below there is the 161.8% Fibonacci extension from the timeframe mentioned on the daily chart neat 1.1738, and then the November 4th lows near 1.1602. 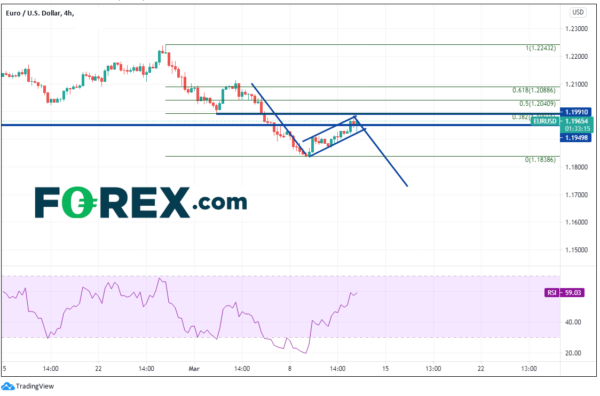 It’s time to start thinking about the FOMC meeting results on March 17th!