Yet more data from Australia’s rebounding economy goes at odds with the RBA’s dovish stance. And whilst on the central bank theme, the Bank of England (BOE) meet this morning. 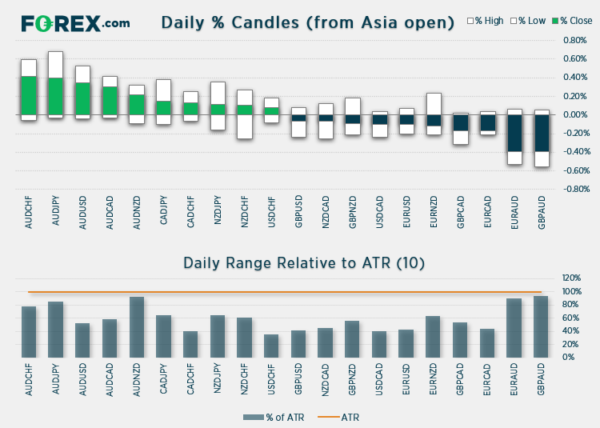 It was a solid finish for the >Dow Jones which closed at 33k to a new record. The S&P500 posted a modest 0.3% gain and etched out a new high, the Russell 2000 pared Tuesday’s losses whilst the Nasdaq 100 closed at a 2-week high.

The bullish potential the FTSE 100 showed on Tuesday (with a close above 6800) was short-lived. Now back beneath that key level and forming a bearish ‘dark cloud cover’ pattern, it serves as a reminder this is not an index to expect two or three consecutive closes in the same direction. And therefore, not an index to outstay ones’ welcome (on the daily timeframe, at least) until a trend actually develops.

The Australian economy added 88.7k jobs in February, nearly triple the 29.1k forecast. But, more to the point, 89.1k full-time jobs were added and the unemployment rate fell from 6.4% to 5.8%. That is no small feat, even if the government JobKeeper aid is to finish at the end of March.

These numbers flying the face of RBA’s expectations of a slow recovery. But then I guess we’ll have to see if momentum is even slightly sustained before expecting the ‘really, really reserved’ central bank of Australia to get ahead of any perceived curve.

Elsewhere in the land of forex:

Clearly, AUD is the strongest (and most volatile) major overnight. Minor ranges elsewhere, but EUR is the weakest major.

Yesterday’s bullish close formed the final candle of a 3-bar bullish reversal (the morning star reversal pattern). Given Tuesday’s bullish pinbar low forms a higher low and failed didn’t even test the 50-day eMA, we are hopeful that a significant swing low is in place. 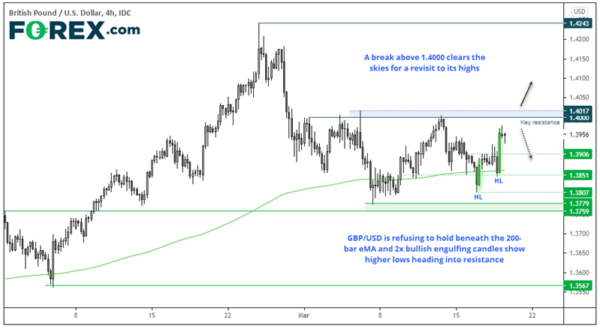 We can see on the four-hour chart that prices are refusing to hold beneath the 200-dar eMA and two bullish engulfing candles show higher lows into resistance. The bias is for an eventual break above 1.4000 but we are also on guard for an initial sell-off beneath it.

Commodities: Palladium is no ‘soft’ metal according to this rally

Palladium prices have extended their bullish surge, up around 15% over the past seven sessions and having clearly broken out of its multi-month sideways range. We suspect momentum has realigned with its long-term bullish trend and will seek bullish setups above 2,500.

Gold hit a high around 1756 overnight, just short of out 1760 bullish target. We cannot ignore resistance levels around the 1760/64, as we’re quickly approaching an area that may tempt bears to reload. Initially at least.

Brent futures tested $67 yesterday and formed a bullish hammer on the four-hour chart. Yet with prices drifting lower overnight, we could expect an attempt to break yesterday’s low. But, as long as prices hold above the 66.55 low then we could see prices range between 66.50 – 70.00 as the markets decide whether they want a much deeper correction, or trend continuation. 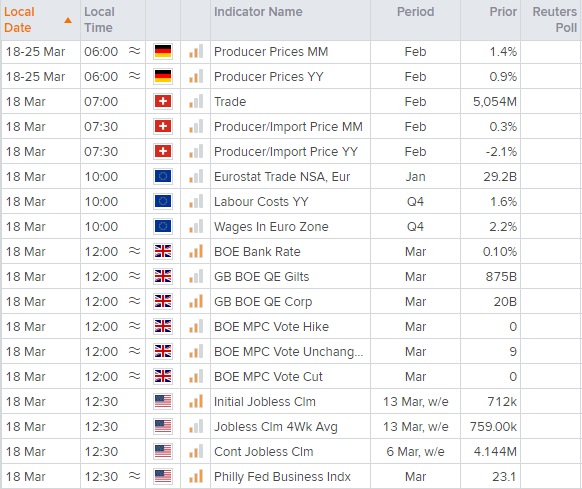