Action Forex
HomeContributorsFundamental AnalysisEuropean Open: Brent And WTI Are Lower As Ever Given' Is Refloated

European Open: Brent And WTI Are Lower As Ever Given’ Is Refloated

Whilst the refloating of the large cargo has weighed on oil prices overnight, it remains unclear how quickly the Suez Canal will be reopened and fully operational. 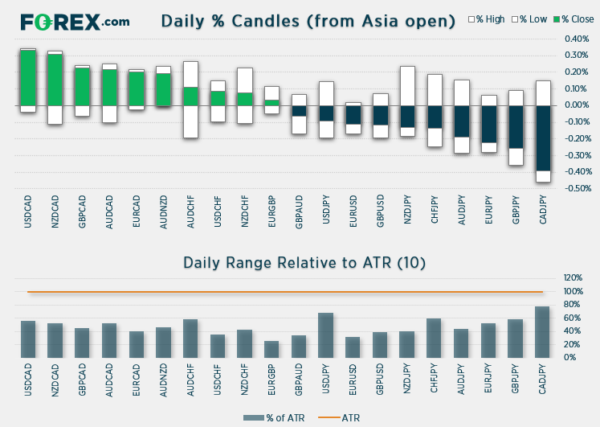 Indices across US and Europe close the week on a high

It was a strong close on Wall Street and across European bourses on Friday. The S&P 500 squeaked its way to a new record high (by around 0.02 points) and led higher by energy and information technology sectors. Communication services was the only broad sector to close lower.

The Dow Jones also hit a record high and closed back above 33,000 for its second time in history. The Russell 2,000 was the strongest performer in the US although, like the Nasdaq 100, are nowhere near their record highs.

It was also a positive finish across Europe as well with the STOXX 50 and German DAX closing just beneath record highs. Our bias remains bullish and for trend continuation. Check out today’s video for a closer look. Asian share markets were slightly higher overnight led by China’s SSEC (+0.79%) and CSI300 (+0.78%).

As we noted last week, the FTSE 100 has remained above its 50-day eMA despite several attempts to break lower. That the daily chart produced lower wicks (or ‘buying tails’) every day last week, before rebounding higher later in the session, can be taken as a sign of strength.

Friday also closed at its weekly high and formed a bullish hammer. However, the 200-week eMA sits overhead at 6750. 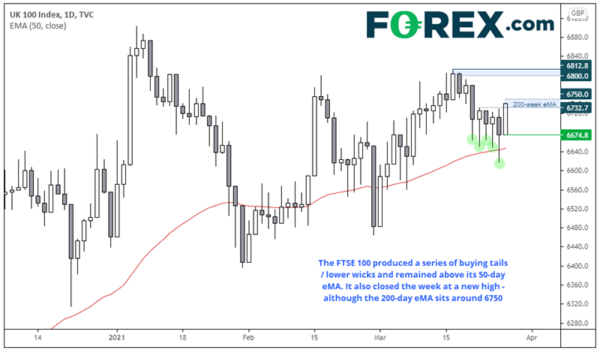 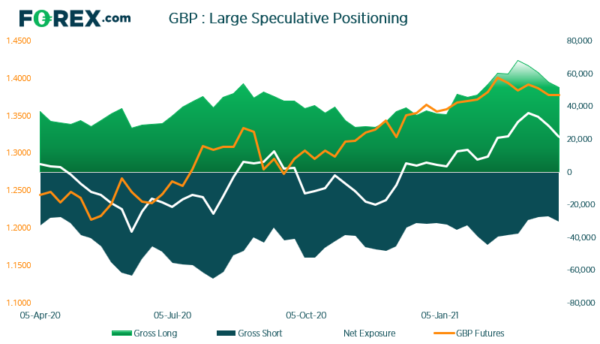 The Canadian dollar is the weakest major overnight, weighed down by oil price whilst the Japanese yen is the strongest. The US dollar index remains just above its 200-day eMA and trades in a tight range around 92.82.

Traders remained net-long the British pound yet reduced exposure for a third consecutive week, taking bullish exposure to a 6-week low. Yet the move has mostly come from a closure of gross longs as opposed to an increase of short (which have only ticked up marginally).

The (in)famous cargo ship, Ever Given has been successfully refloated overnight which has weighed on oil prices. Yet it still remains unclear just how quickly the Suez Canal will be reopened and fully operational.

Brent and WTI are -1.3% and -1.7% respectively, although volatility is relatively tame compared with daily whipsaws seen last week. Yet despite the turbulence prices have remained above their 50-day eMA. So if volatility continues to subside, then we’d seek a break above $65 to suggest bulls were back in control. See today’s video for a look at brent futures.

Palladium closed to a six-day high last week and above 2657.50 resistance, which suggests it may have completed its correction from March’s high. Technically the trend on the daily chart remains bullish above the 2564.50 low, although Friday’s low at 2618.50 could also be used to fine tune risk management. Palladium has recently broken out of a multi-month sideways range and its measured move from the range places an initial target around 2807.

Copper closed back above $4.00 on Friday but traders slightly lower for the session today, yet still above $4.00. The daily chart is showing the potential to form a triangle pattern, but if prices break lower then we would see if prices can find support around the September 2012 high at 3.84, or its bullish trendline projected form its October low.