There were no major surprises from RBNZ today, but consumers in Australia are their most confident on the economy in 11 years.

It was a strong close for the Australian share market with consumer sentiment jumping to an 11-year high. Looking past a slow vaccination rollout (not that it seems too urgent with such low cases anyway…), consumer have an optimistic outlook on family finances and the economy according to the Westpac-Melbourne institute survey.

Yet that weas clearly not the case in Japan as machinery orders unexpectedly plummeted, dashing hopes of an investment-led recovery. Machinery orders contracted -7.1% YoY in February, down from 1.5% in January, and orders contracted -8.5% MoM verses -4.5% prior. Equity makers in Japan were broadly lower with the TOPIX and Nikkei 225 falling -0.5% at one stage, helped lower by a stronger yen which saw USD/JPY hit a three-week low and fall beneath 109.00.

The FTSE 100 was effectively flat yesterday’s the close, following a bad start as oil stocks and soft GDP data initially sent it lower. Yet it recovered later in the session and closed the day with a bullish pinbar above its 10-day eMA. Looking at the four-hour chart shows a double bottom at 6853 which shows upside potential, although we’d now like to see prices recover above the January high of 6903 if it is to stand any chance of new highs today. 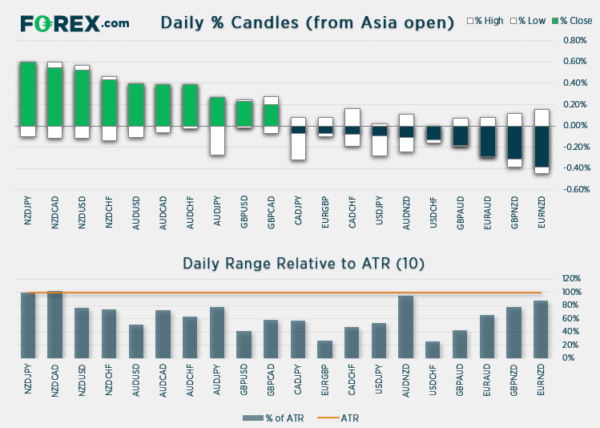 Forex: RBNZ hold rates, dollar on the back ropes

NZD is the strongest major after RBNZ held interest rates at record lows. Whilst they hinted that lower rates are still possible, they have hopes that the trans-Tasman bubble between Australian and New Zealand should support income and employment, which removes any immediate fears of a rate cut. 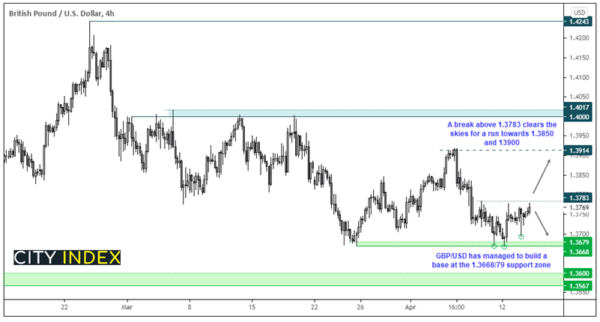 GBP/USD is slowly making bullish progress after finding support at 1.3670. Whilst price action continues to look corrective on the daily chart, it appears demand is slowly building on the intraday timeframes. The four-hour chart shows two ‘buying tails’, with the latter being a higher low. It has drifted into resistance ahead of the open, so 1.3783 may provide interim resistance for range traders, but a break above this level clears the skies for a potential run towards 1.3850 and 1.3900.

Commodities: Oil ready to wake up?

WTI futures are back above $60 and gapped up at the open. Now nearing the top third of its 57.25 – 62.27 range, a break above yesterday’s high brings the top of its range into focus.

Platinum futures closed below trend support outlined in yesterday’s video. If our bias is correct, price are still within a corrective phase from its February high and could be headed for 1100, or even 1000. This bias remains whilst prices remain beneath 1250.

Up Next (Times in BST) 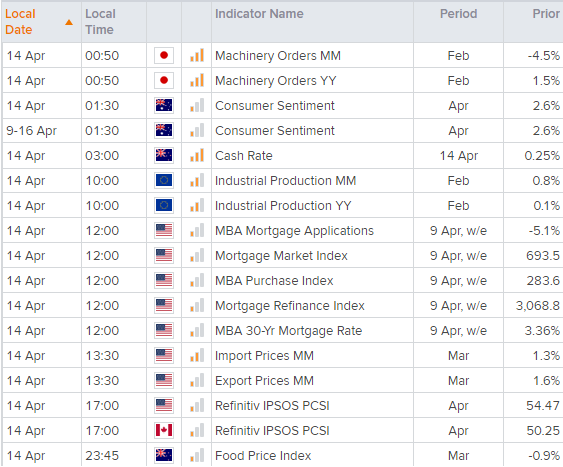