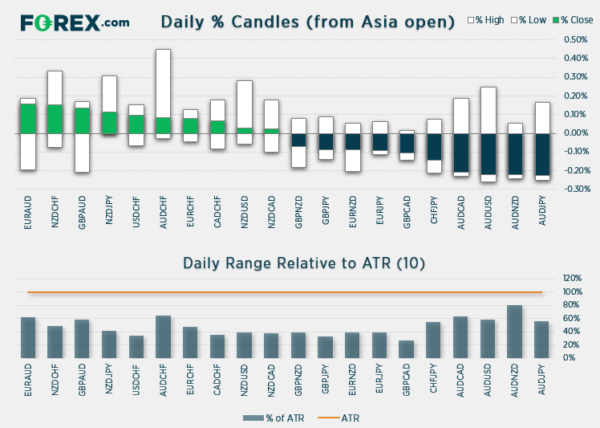 US indices print ominous candles at their highs.

Well, the Nasdaq did hit our 14,000 this week. For all of 2 minutes. After briefly touching the key milestone on Tuesday and closing at 13,879, it set the stage for yesterday’s bearish engulfing candle from the record high. Therefore, the odds favour a retracement from current levels whilst prices remain below its record high, with 13,660 making a viable first target. But given we are in the middle of a wave ‘3’ uptrend, we make no promises this will be a large correction. 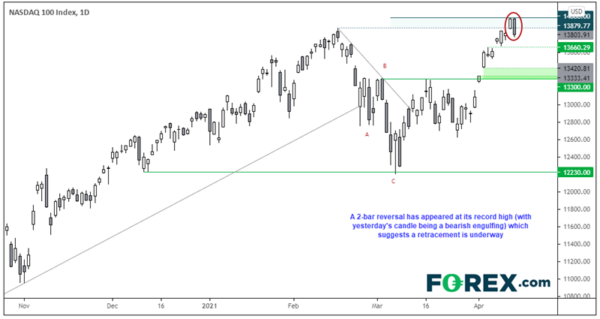 The S&P 500 also left a bearish engulfing candle in its wake yet, overall, price action appeared less ominous compared with the Nasdaq. The CAC 40 hit a new record to lead the way higher in Europe, whilst the DAX remains within its tight range, looing for a directional cue to confirm a counter-trend move (with a break below 15,110) or the resumption of its uptrend (with a break to new highs).

Large-cap oil and mining stocks lifted the FTSE 100 yesterday, led by Glencore (GLEN.L), Antofagasta (ATO.L) and BP (BP.L). AstraZeneca PLC (AZN.L) recouped 1.5% after its lung cancer treatment Tagrisso was approved by China’s health regulator. At the other end of the Spectrum was Tesco, which found itself in the dented tin aisle with a -4.1% decline following a 20% drop in its pre-tax profits.

The FTSE 100 broke above Tuesday’s bullish pinbar to close at a four-day high. Further gain appear the more likely route with prices accelerating away from their 10 and 20-day eMA (which are also fanning out as they point higher).

It was another strong employment report for Australia with unemployment at a one-year low and creation is at a pre-pandemic peak. This is on the back of consumer sentiment which hit an 11-year high yesterday. All jobs lost during the pandemic have been recouped, plus some more as total employment is at a record of 13 million. Yet with a central bank hell-bent on doing absolutely nothing (towards raising rates) then the market looked elsewhere.

It was minor ranges overnight, despite a glowing employment report from Australia. In fact, AUD and CHF were the weakest majors at around -0.2% lower.

The US dollar index (DXY) trades just above yesterday’s lows and about midway to the initial 91.30 target with a break beneath 92.00. Whilst we see the potential for a minor pop higher from current levels, the bias remains bearish below 92.00.

And if that is the case then EUR/USD may have issue testing, let along breaking above 1.2000. Whilst the euro appears structurally bullish, bulls may prefer to buy dips at lower prices or wait for a clean break above 1.2000 before pursuing bullish setups.

Despite dollar weakness yesterday, GBP/USD failed to hold onto a breakout above 1.3783 resistance and now trades just beneath its 50-day eMA. A break above yesterday’s high suggests it to be a minor blip / setback, but if prices driver lower after the open then we may have a fakeout on our hands.

GBP/AUD closed to three-week low yesterday following a convincing break lower of its bullish channel. Given it is about half way to our 1.7700 target, we would prefer to see a retracement from current levels before seeking bearish reversal patterns on lower timeframes, to increase the potential reward to risk ratio. The bias remains bearish below 1.8000, although we really don’t want to see any retracement bounce above 1.7933.

EUR/CAD I struggling to hold above 1.5000. Given the series of upper wicks (selling tails), perhaps this is preparing for a minor leg lower.

Commodities: Oil high on its own fumes

Oil prices held onto gains overnight, after breaking above key resistance levels yesterday. With fundamentals aligning with its longer-term bullish trend, we won’t be seeking any counter-trend moves at present.

Copper prices also remained just off yesterday’s highs, and price action continues to point towards strong demand around $4.00 as prices have repeatedly failed to hold beneath it since its correction began late February.

Up Next (Times in BST) 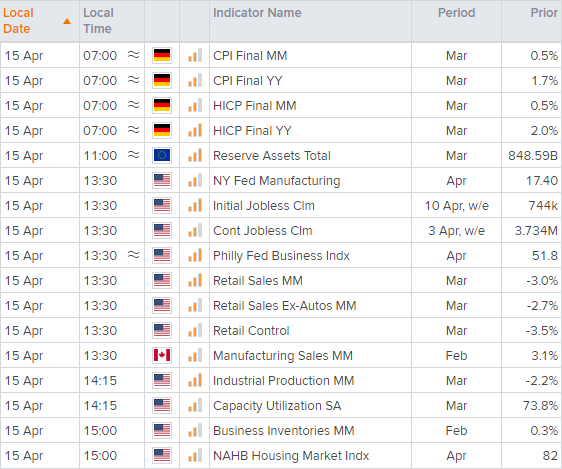