Friday’s weekly COT report (Commitment of Traders) revealed net-long exposure had fallen to its lowest level since December for the Australian dollar. 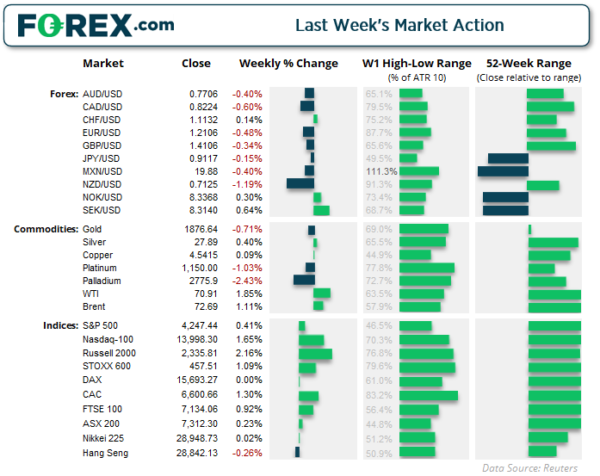 Indices rally into the close

It was a good week for equity bulls, with the S&P 500 closing at a record high, the Russell 200 closing just shy of it, and the Nasdaq 100 finishing the week just below 14k. The Dow Jones is -1.7% beneath its record high, although bulls are making no effort to retest it as the industrial index actually closed lower for the week.

The STOXX 600 and CAC 40 also broke to records high, and the DAX printed a 3-bar bullish reversal pattern (Moring Star Reversal) above its 20-day eMA. The FTSE 100 broke above trendline resistance and trades just 0.42% from its record high.

The ASX rose 0.23% last week and formed a small Doji candle, outside of upper Keltner band, potentially warning of overextension to the upside. It’s currently up 2.1% for the month and amidst it ninth consecutive bullish month, so perhaps there is a case to build around a reversal at some point. A break below 7265.60 confirms a bearish hammer on the daily chart but, until then, it remains in a bullish trend and bulls are likely to take interest if it retraces to last week’s low. 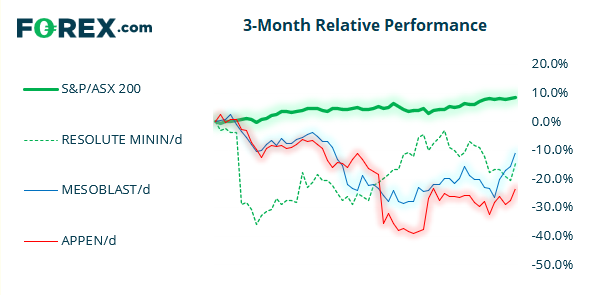 From The Weekly COTR (Commitment of Traders Report) 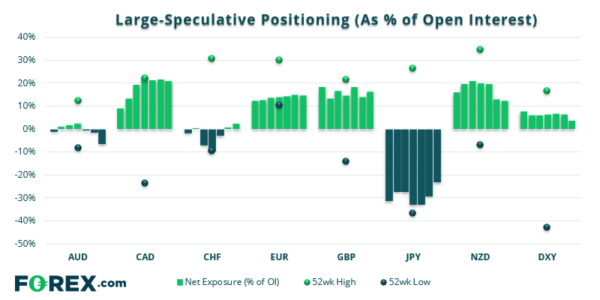 As of Tuesday 8th June

Net-short exposure was trimmed on Japanese yen futures, with traders now their least bearish since March (when they were last net-long).

Traders were net-long on Swiss franc futures for a second consecutive week, taking bullish interest to its highest level in nine weeks.

Bearish bets continue to rise on copper futures, with gross short exposure rising to its highest level since March 2020 and pushing net-long exposure to its lowest level since June 2020. Gross longs were also reduced to their least bullish level since August 2020.

Short interest is also aggressively rising on platinum futures, with gross shorts now at their most bearish level since January. Net-long exposure is now at its least bullish level since November.

Forex: Dollar finishes the week on a high

Strong US consumer sentiment saw the US dollar broadly strengthen and finish as the strongest currency on the day. The US dollar index (DXY) rose to a five-day high during its most bullish session of the week although found resistance at last week’s high (90.63). A break above here confirms a deeper counter-trend move, although fundamentals still favour a weaker dollar so we’re not looking for a large rally at this stage, and would seek bearish setups below 91.40 further out. Month-to-day the dollar is the second strongest currency (second slightly to the Swiss Franc), whilst the New Zealand dollar and euro are the weakest. 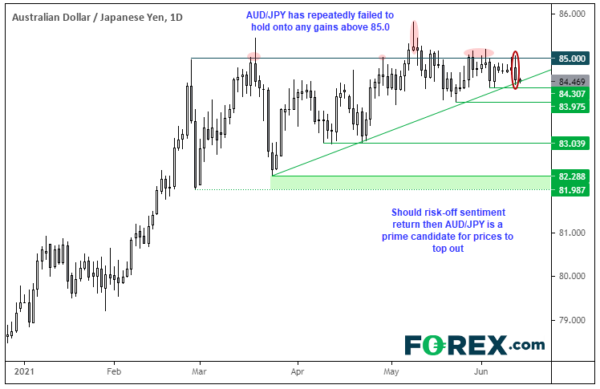 AUD/JPY has repeatedly struggled to hold onto any gains above 85.0 since first rising up to it in March. There are several higher wicks where intraday high penetrated this key level only to close the day lower. Although it did manage to stay above it for two days in May before reversing lower once more. So we find it of interest that a bearish outside / engulfing candle formed on Friday to take prices back to trend support. Although we’d want to see a break of the 84.30 low before assuming a top was in place. However, what this pair really needs to satisfy a sustainable bearish move is for a risk off-event. And, if that were to materialise, bears can switch to lower timeframe and target lows around 83.87 and 83.04.

AUD/CHF is also trying to break lower form its sideways range after breaking beneath 0.6917 support on Thursday. If prices truly are breaking down we would not expect a retest of Thursday’s bearish outside day high of 0.6955.

Gold prices rolled over at trend resistance and retested its March trendline on the daily chart in the face of a stronger dollar and US consumer sentiment report. Given the strength of Friday’s bearish engulfing candle, it no longer seems fitting that we’re witnessing a bullish triangle forming as volatility should be contracting ahead of a bullish breakout, not expanding to the downside near the apex. Still, there’s chance of a minor bounce within the triangle but we could take a break beneath 1869 as a sign the top is in place and switch to a bearish bias.

Up Next (Times in AEST)