Bank of Canada Preview: Will the BOC Taper?

At the last Bank of Canada meeting on July 14th, the BOC tapered bond purchases from C$3 billion per week to C$2 billion per week, as the central bank felt the economy would continue to strengthen. In addition, although they slightly lowered their 2021 annual GDP to 6%, they raised they 2022 forecast to 4.5%. The committee said that they expect inflation to remain above 3% in the short-term while converging near 2% in 2022.

However, when the BOC meets on Wednesday, they may consider a delay in their tapering until the next meeting on October 18th. Although the Markit Manufacturing PMI for August was slightly better than July (57.2 vs 56.2), the data from July was mixed, with the Employment Change at 94,000 vs 230,700 in June. The Unemployment Rate also rose slightly to 7.5% from 7.4%. The next look at Canada’s Employment Change won’t be until Friday, after Wednesday’s BOC meeting.

What are economic indicators?

Another reason they may delay is due to inflation. Although CPI was much stronger than expected for July at 3.7% vs 3.1% expected, the final PPI was -0.4%, much weaker than the initial estimate of +0.1% released just 2 weeks prior. (In theory, PPI flows through to CPI down the road).

Also, although backward looking, Q2 GDP was a big miss vs estimates. The Q2 headline number was -0.3% vs +0.6 expected and +1.4% in Q1. Annualized, it was even worse! The print was -1.1% vs +2.5% expected and +5.5% in Q1. Because of the large difference between what economists were expecting and the actual print, the BOC may want to wait more data from Q3 before tapering again.

Still another reason the BOC may be on hold is because Prime Minister Trudeau called for snap-elections to take place on September 20th based on the strong economic recovery from the coronavirus and the vaccine distribution. The BOC may not want to be seen as favoring Trudeau by tapering on Wednesday.

USD/CAD is at a critical support zone that could determine the future direction of the pair. There is a band of horizontal support between roughly 1.2500 and 1.2600. 1.2590 and 1.2480 are also the respective 50% retracement and the 61.8% Fibonacci retracement from the June 1st lows to the August 20th highs, offering more support to the area. Also note that the 200 Day Moving Average on the daily timeframe (not show) comes in just below at 1.2534. If price moves below this zone of support, it could move to test the June 1st lows near 1.2000. However, if price can bounce above this zone, the August 20th highs could come into play once again near 1.2950. 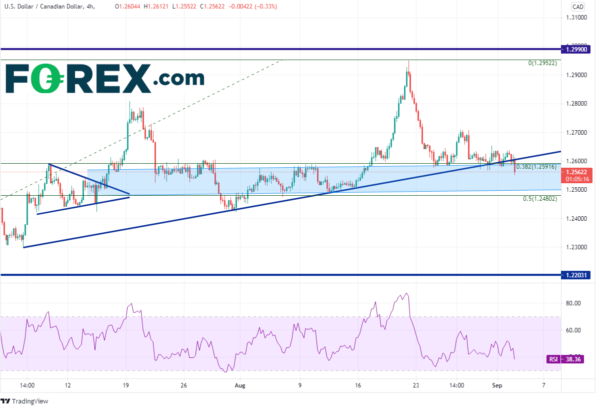 The BOC meets on Wednesday. If they feel the economy will continue to improve after the post-Covid shutdown, they may taper once again. However, if they believe jobs and inflation may have slowed, or are concerned about the upcoming election, they may pause and wait until the October meeting before they act again.