Although not a surprise to anyone, the FOMC hinted today that moderation in the bond-buying pace ‘MAY soon be warranted’. Understanding Fed semantics, the markers seemed to focus on the word ‘May’ to mean ‘May, or May Not’. Therefore, the statement is ‘as expected’. stocks moved higher and the US Dollar moved lower. 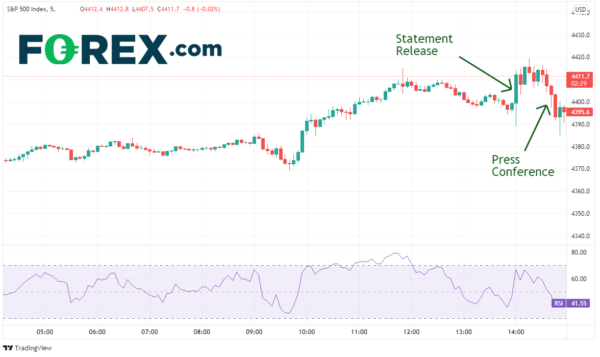 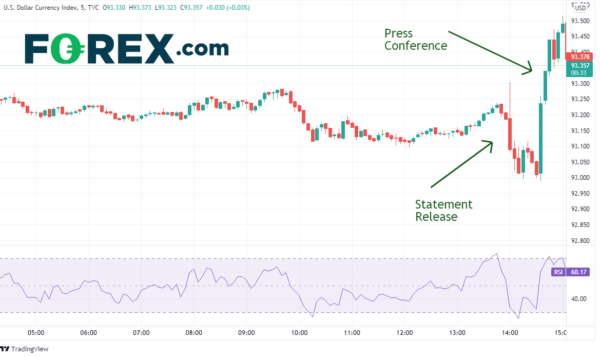 However, notice in the charts above that price reversed about 30 minutes after the statement was released. There was a straightforward surprise in Fed Chairman’s Press Conference that followed, ‘Language in the statement is meant to flag bar for taper could be met as soon as next meeting’. In addition, he followed up with, ‘Many of the FOMC feel substantial further progress test on employment has been met. My own view is that it is all but met’. And one more statement that ‘tapering could conclude in the middle of next year’. This is the most hawkish the Fed has been since the beginning of the pandemic.

But did stocks care? Nope. Buy the dip has been the war cry since the beginning of the pandemic and stock markets obliged at the day’s open. However, the S&P 500 was violently unchanged for the last 2 hours of trading. 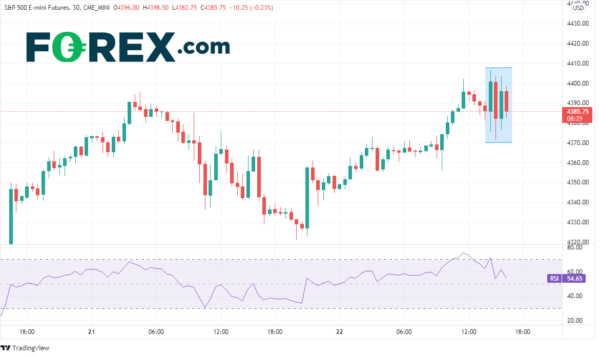 US Dollar reacted differently! The DXY moved aggressively higher from 92.99 to 93.51 and continued to trade near the highs of the day into the close. As one may expect, if the Fed is to begin tapering, the US Dollar should move higher (less Dollars in the system equals higher prices). In addition, the FOMC noted that inflation had been higher than they thought it would be earlier in the year and expected inflation to be 4.2% at the end of the year! This is another reason for the DXY to maintain its bid. Watch for this to be the theme moving forward. 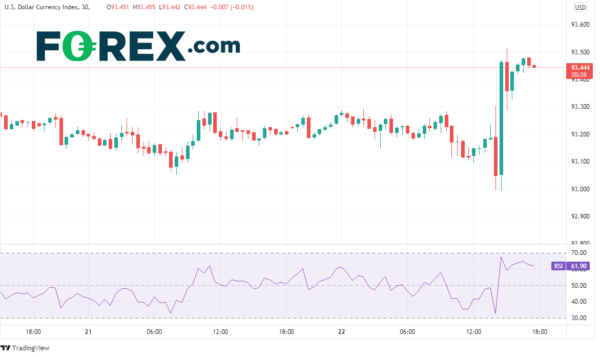 With other risks in play, such as the Evergrande saga and the US debt ceiling debate, US stock may have a tough time continuing higher. There is a lot of resistance above, including the gap from this past weekend, the 50% retracement level from the September 6th highs to Monday’s lows near 4421.25, and the 50 Day Moving Average(not shown) at 4430, just to name a few. Support is at the day’s low of 4321.25 and then Monday’s low of 4293.25. 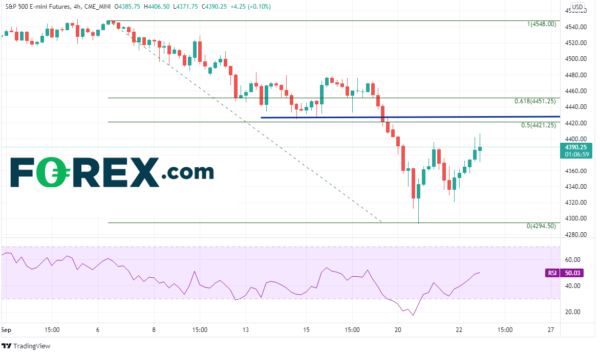 With an ‘as expected’ statement and a hawkish Fed presser, stock indices and the US Dollar were extremely volatile into the end of the day. In theory, with the Fed hinting at a taper and higher inflation forecasts, US stock indices should move lower and the DXY should move higher. Watch for continued volatility as we head towards the weekend.