At least in terms of its likely impact on monetary policy, Friday’s NFP report may be less significant than just about any US jobs report we’ve seen in years. With Fed Chairman Jerome Powell all but committing to announcing the central bank’s tapering plans at its next meeting in November, it would likely take an absolutely abysmal jobs report to prompt Powell and company to reconsider their current outlook.

Looking at the early projections, traders and economics are anticipating a headline reading of about 490K net new jobs in September, more than double last month’s 235K print. The unemployment rate is expected to tick down to from 5.2% to 5.1%, with the average hourly earnings figure expected to rise at 0.4% m/m vs. last month’s 0.6% increase.

One key factor to watch in this week’s jobs report will be the ongoing impact of the COVID-19 delta variant on the US labor market. Last month’s reading was the lowest reading since January, and certain pandemic-sensitive service sectors were particularly hard hit; for example, the leisure and hospitality industry was flat in August adding more than 415K jobs in July.

Thankfully, the latest data on the pandemic shows US cases declining sharply after peaking in the middle of September, suggesting that travel-sensitive industries may flip back into growth mode sooner rather than later. However, it is worth noting that the NFP survey was conducted relatively early last month, so any improvement may not be fully captured in this week’s release: 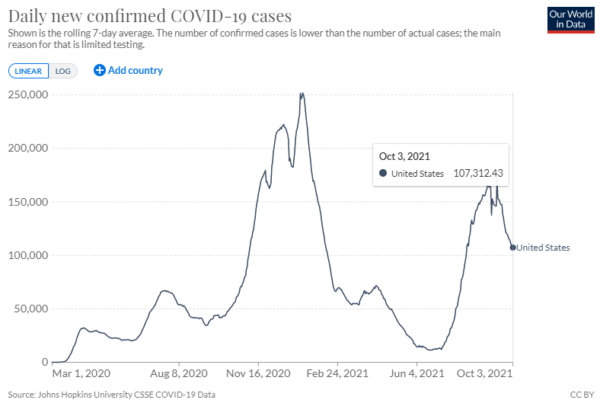 One final early week thought: The US jobs market continues to struggle with a so-called “labor shortage.” In other words, jobs are theoretically plentiful, but potential employees are unwilling to work at the current offered wages. To wit, the most recent Challenger, Gray, and Christmas report showed less than 16K job cuts by employers, the lowest reading since 1997 (!). Despite

Whether this dynamic is due to citizens re-evaluating their employment opportunities post-COVID, extended unemployment benefits, or a temporary mismatch between employers’ needs and potential employees’ skills (…or a combination of all three!), it will be critical to watch whether “labor” or “capital” maintains the upper hand in the US labor market.

After five straight months of average hourly earnings rising at least 0.4% m/m, rising wages could start to drive a more durable and less “transitory” version of inflation, much to US central bankers’ chagrin. That scenario would be a potential bullish development for the US dollar index, which is pulling back from resistance in the mid-94.00s to start the week, but nonetheless remains in a clear uptrend with support sitting just below current prices in the lower-93.00s: 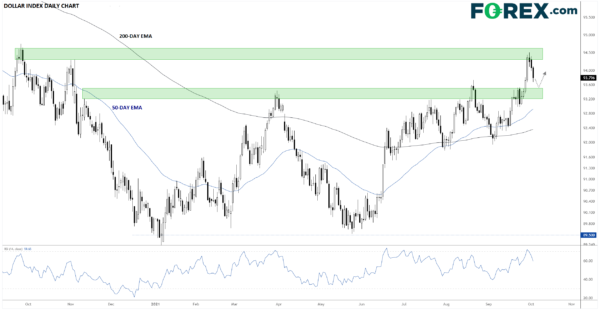